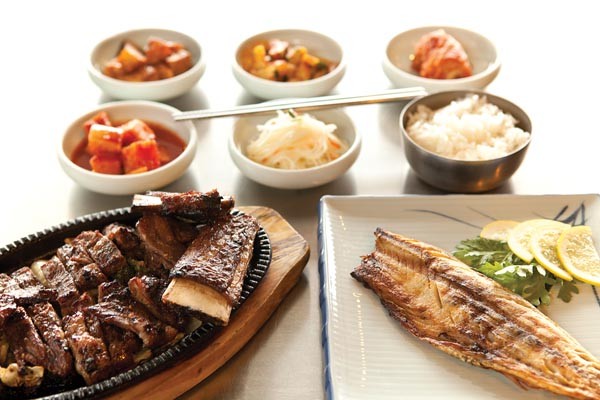 Once upon a time, when Italian and Chinese cuisines were still considered exotically foreign, restaurants deemed it necessary to describe them by vague analogy. Thus, pizza was first known to many Americans as "tomato pie," and lo mein as "Chinese spaghetti." It can be helpful to know that something new is actually a lot like something familiar. Today, though, foreign cuisines are so numerous and ubiquitous, even non-adventurous diners seem able to handle the real deal.

On the other hand, there are only so many ingredients and cooking techniques, and it can save a lot of translation to use familiar terms. Which brings us to the kimchi "pancakes" at Dasonii Korean Bistro out in Robinson. Needless to say, there is no pitcher of maple syrup served with spicy, fermented cabbage, mixed with just enough batter to hold it together in a small, flat round and pan-fried to a crisp. It was so crispy, in fact, that pizza might have been a better comparison. The genius of this dish was in its blend of textures and flavors, with cabbage both tender and crunchy, and zesty, spicy kimchi balanced by just enough starch.

Many Korean places refer to themselves as offering "barbecue," but bulgogi is actually closer to American grilling, with marinated slices of meat cooked over hot coals rather than the slow, smoke-based cooking that barbecue normally suggests. While it's common for bulgogi to be prepared with thinly-sliced meat, Dasonii — where grilling takes place back in the kitchen, not out front in the do-it-yourself style — also offers short ribs. A dining companion who had visited before suggested these, and Jason was glad he took him up on it, because it was one of the best meat dishes he has ever tasted. The pieces, about the size of a steak fry, fairly burst with savory umami flavor, while their seasoning of garlic and pepper provided intensity, not sting, and a smoky char pervaded the meat without hiding it at all. The only down side was some tougher pieces — there's a reason short rib is most often slow-braised — but Jason will remember this dish for its excellence.

If bulgogi and kimchi remind us of barbecue and slaw, bibimbap might be described as a savory, hot sundae composed of noodles, vegetables and meat piled atop rice in a searingly hot pot, with a fried egg as the cherry on top. "Put an egg on it" may be the culinary cliché of the moment, but the Koreans have been doing it for centuries, and it's always been the signature attraction of bibimbap, which Dasonii serves in a hot stone pot ("dolsot") or an ordinary clay pot.

We tried dolsot with seafood, whose delicate meat was surprisingly well cooked in the rough stone vessel. Small shrimp and large bay scallops were succulent and juicy, and diced squid sweetly tender (except for a few pieces that spent too long in contact with the stone and grew tough). But we didn't find much else to recommend the dish. Even with spoonfuls of coarse chili sauce dolloped in, there simply wasn't much flavor. And while there was some textural interest in the rice which, as the menu promised, became crunchy in the bottom of the pot, our interest soon waned in the absence of much to taste.

That interest picked back up with stir-fried udon noodles. With bulgogi mixed in, this was another umami-fest, but this time with a touch more sweetness from oyster sauce and, of course, the wonderful, fat, soft texture of udon noodles. The Japanese use them primarily to fill out brothy soups, but their pliant yet substantial presence made them a perfect pairing for stir-fry.

Finally, like so many Asian restaurants, Dasonii offers sushi. We appreciated that the nigiri were closer to morsels than mounds, this being closer to the spirit of sushi's origins, and we found the fish fresh, if otherwise unremarkable. With its rolls, Dasonii departs from authenticity, offering almost exclusively elaborate stunt maki with long ingredient lists and lots of sauces drizzled on top; simple, classic tuna or cucumber maki were not even available on request. Nonetheless, we had nothing to complain about in our Dasonii roll, which combined tuna, salmon and an unnamed "white fish" for a sort of meat-lover's sushi.

It shows how far American dining has come that, to many, sushi is often the most familiar item on a Korean restaurant menu. But the real highlights at Dasonii are the Korean dishes, which deserve to be better known.