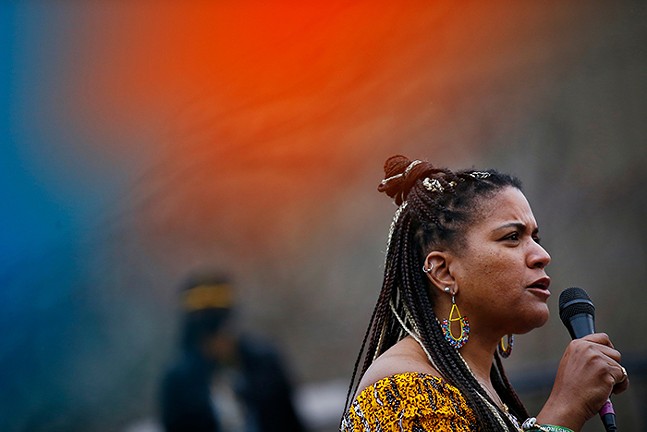 CP photo: Jared Wickerham
Dannielle Brown at Freedom Corner in the Hill District in March 2021
On April 8, attorneys for Dannielle Brown — who was up until recently on a months-long hunger strike in protest over the death of her son Marquis Jaylen Brown, a student at Duquesne University — announced that Brown and the university had reached a settlement related to claims made surrounding his death in October of 2018.

Brown was on a hunger strike, in which she was only ingesting liquids and nutrients, for more than 230 days starting in summer 2020. She ended her hunger strike in March 2021. Brown was requesting more answers regarding the death of her son, and there was conflict over access to the information she was requesting.

With the case settled, university officials are satisfied that this matter is resolved, according to a statement released by Brown's attorneys Paul Jubas and Max Petrunya.

“Our deepest condolences, thoughts, and prayers will forever be with the Brown Family,” said Duquesne University President Ken Gormley in a release. “JB [Marquis Jaylen Brown] remains an important member of the Duquesne University community. The University will continue to take a proactive approach to cultivating a safe and socially conscious environment for our students.”

Jubas and Petrunya said in a statement that Brown appreciates the condolences offered by Duquesne University, and that the university also agreed to purchase body-worn cameras for university police, enhance its de-escalation training, and enhance other training for its officers.

"In bringing this case to a close, Dannielle Brown will now devote her focus and energy to a broader mission of achieving social justice through the Marquis Jaylen Brown Foundation,” said Jubas and Petrunya.

Brown tweeted on April 8, "It is settled but never to be forgotten...The Marquis Jaylen Brown Foundation will continue to champion for Mothers and Students~changing the fabric of Injustices one college campus/university at a time! Until My Last Breath!"

The terms of the settlement agreement are not being disclosed.