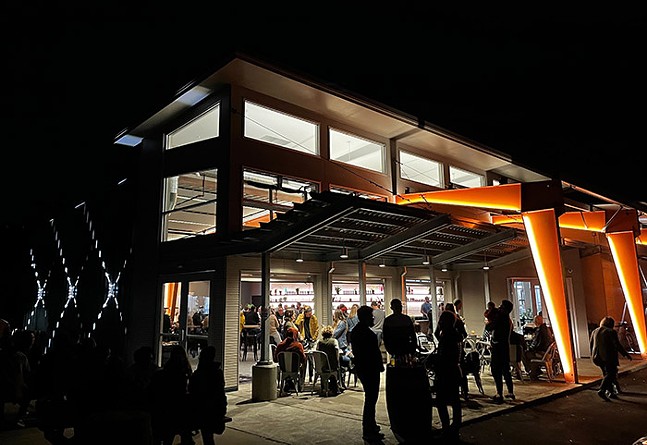 CP Photo: Owen Gabbey
Dancing Gnomes new taproom in Sharpsburg
Few breweries have affected the Pittsburgh beer scene quite like Dancing Gnome. Since its opening in 2016, it’s earned national acclaim, with IPAs and stouts worth seeking out, no matter where beer fans are located. This small brewery in Sharpsburg helped put Pittsburgh craft beer on the map, and they haven’t slowed down since.

Now, five years later, Dancing Gnome has expanded, opening a new, massive space just down the street from its original location, with all of the amenities one could want from a taproom in 2021. The space is beautiful, and a distinctly non-traditional spot in comparison to most breweries in the city: all futuristic vibes, big open spaces, and a lot more bathroom and parking space then the original location.

Pittsburgh City Paper talked with Founder/Head Brewer Andrew Witchey about the new space, and what this means for Dancing Gnome.

You opened Dancing Gnome as a modest taproom back in 2016, which is a lifetime in the craft beer industry. Did you ever dream that Dancing Gnome could attain this level of success five years ago?
I think yes and no. Getting the first place open and building that space is what I wanted to do, and seeing that come to fruition and being able to be a small brewery producing the beers that we wanted to produce for Pittsburgh was important.

I actually distinctly remember those first few years ... We have the fortune of being a popular brand, we had those releases of people camping out for our beers, and people would always ask, “Are you going to expand?” And honestly, my answer was, “No, I don’t want to go through this. It took me two years to open this space. I want to brew beer. I opened this space to brew beer.” And then it got to the point where we realized we either need to grow, or we need to take a step back, because as we started to grow as a company and wanted to do different things, it was hard! We didn’t have the space to be able to brew all of the styles we wanted to brew, our taproom was small, it was busy all the time, which on some levels is great, but we want to be able to share our beer with everybody. So it became, “Yeah, I’m ready for another challenge,” and here we are.

CP Photo: Owen Gabbey
Dancing Gnomes new taproom in Sharpsburg
In terms of the new building, it’s right down the street from the original. Was the plan to alway stay in Sharpsburg and be part of that community?
It was always the hope. I had went through the process at other places throughout the city, and then this place kind of fell into my lap. I knew the gentlemen who owned the place and said, “If you’re ever looking to sell, make sure I’m sure the first to know.” And I was actually negotiating on a different space, and he called and was, like, “I think I’m ready to sell, do you want it?” and I was like, “Yes!”

From the brewing side, what will this new space allow for in terms of production?
Really volume. It’s much bigger, our production space (at 1025) is much bigger than our entire space including the taproom at 925. The other thing is, it was built and designed from the ground up as a brewery, so the efficiency is there. So we’re still growing modestly, but it allows us to brew more volume of each individual beer, as well as more beer. We have way more tanks here, we have bigger volume tanks here, so we can really focus on quality. We don’t have to worry about “OK, we have to get this beer out because we don’t have enough to service the taproom this weekend.”

And from a customer facing side, what are you most excited to show off about the new taproom?
I think we ultimately designed this space to carry over a lot of the comfort. I think we curated a vibe in our old taproom that was cozy and comfortable. We’re always going to be product forward, and I think that’s important to me and to our brand, that we’re about the product. And we definitely want anyone that comes to our spot to have a wonderful experience, but for the most part, our demographic is coming for the beer. So our old space was small and cozy and we wanted to translate that over here, but this new space is also much larger and more open, so it doesn’t feel as dense as it did at 925, when on a Saturday it felt shoulder to shoulder.

So this was designed to carry over the coziness of 925, as well as offer a space that felt much more open. It also will maximize service. Instead of that one tiny section at the bar that everyone had to order from, we can now have a 10-person bar that’s unencumbered by anything else. So it is built for service, and letting everybody be able to order their beers and enjoy their time with friends and family.Dancing Gnome. 1025 Main St., Sharpsburg. dancinggnomebeer.com