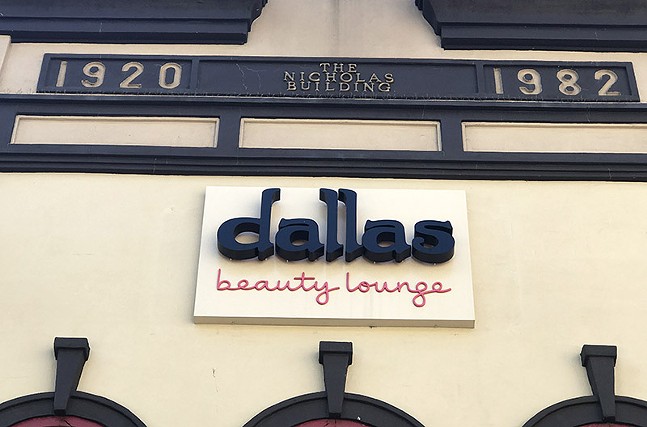 On Wed., June 10, Twitter user Maxxy Rainbow posted an extensive thread outlining how staff and clients experienced Michelucci using racist language in front of staff and clients, much of which disparaged those of Asian descent and Asian-American owned salons. The thread, which has been ongoing, contains screenshots of text conversations and social media posts where Michelucci touted her salon as being cleaner, that her staff was American and “spoke English,” and guaranteed “no asians ripping your nails off, talking bad about you, or not understanding what you want!”


The owner of Dallas Beauty Lounge in Pittsburgh / Bridgeville, PA (Dallas Michelucci formerly Dallas Saures) has been exposed as a vehement racist, discriminating against POC stylists and making racist comments about Asians and Asian nail salons... A THREAD pic.twitter.com/sW6cEagLBz

Other tweets accused Michelucci of discriminating against Black employees or not hiring Black beauty professionals altogether, including one tweet accusing her of allegedly saying, “I don’t hire black girls, they can’t follow the rules.”

Since the thread, which has gone viral, went up, employees at the Market Square location have allegedly walked out, according to a former employee who spoke to Pittsburgh City Paper.

In addition to the online comments, Michelucci has been accused of unethical labor practices, primarily not paying workers overtime they were owed, which resulted in the salon chain being reported to the Pennsylvania Department of Labor and Industry.


The former employee says she left because of labor disputes and claims other former coworkers who quit still have tools they own left behind at the salon and are waiting for a response from Michelucci on when they can retrieve them.

She believes the backlash against Dallas Beauty Lounge has been a long time coming, calling it a “ticking time bomb.”

Another former employee, who spoke to CP on the condition of anonymity, says the screenshots circulating on Twitter are “not the only instances where [Michelucci] has shown her racist side.”

“She would continually bring down Asian salons, making remarks that they are 'dirty' and 'uneducated,'” says the employee, who asked to remain anonymous because she fears retaliation from the owner and her family.

She also claims that the owner discriminated against non-white workers, adding that, in the rare instances that employees of color were hired, they were never trained properly and were eventually fired.

The user behind the thread, Maxxy Rainbow, a Eurovision blogger who performs drag, echoes this, saying she had applied to Dallas Beauty Lounge about two years ago as she was finishing up cosmetology school. For a little over a month, Rainbow says she was given the run around about scheduling an interview until Michelucci “just emailed me stating that she really appreciated my work and personality but that I 'didn’t fit the image of the salon.'”

“Almost their entire staff is white, spray-tanned, blonde-haired women, and I am not those things, so it made me feel very unwanted in the industry in general,” says Rainbow, who identifies as a “cisgendered male who does drag,” but at the time had “long, bright yellow hair and dressed very gender nonconforming.” Rainbow is going by her drag persona.

Rainbow says she posted the thread after seeing a post going around on Facebook showing a few of the “inappropriate statements made by Dallas using her company Instagram.”

“At first I just shared the post and wrote my experience there, hoping to make people more aware of what was going on,” says Rainbow, “however, the more I followed the thread and looked deeper into other customers' experience and what former employees were saying, I felt it was necessary to create a more comprehensive list showcasing all of the allegations against Dallas. I just created the thread on Twitter for my own sanity, to be able to organize what all I was seeing, but then more and more people saw it and came forward with their experiences working with the company, and it just snowballed from there.”

She says the information in the thread was found either by going through Michelucci's and Dallas Beauty Lounge’s Instagrams (both of which are now private), as well as “interviewing several other employees to understand their experience and get more insight into the day to day at the salon.”

“I am a huge advocate for informed consumerism and I believe everyone should be aware of what and who they are supporting, so my main goal from the thread is just to make as many people as I can aware,” says Rainbow, adding that discrimination in the workplace isn't exclusive to Dallas Beauty Lounge. “It also doesn’t just stop at Dallas Beauty Lounge. It is 2020 and if other local businesses are going to share racist or discriminatory statements I think we as consumers deserve to know and make that decision as to whether or not we will continue to support them.”

Dallas Beauty Lounge has been voted as Best Nail Salon multiple times in recent years in Pittsburgh City Paper's Best of Pittsburgh Readers' Poll. City Paper editor in chief Lisa Cunningham says the company has made the decision beginning with this year's poll to officially eliminate any nomination that "is found to have posted any harmful defamatory racist, sexist, homophobic, or transphobic commentary on social media or elsewhere."

CP will continue to update this story as new details come in.