Dale Watson takes country back to its roots

"You take a guy like Kenny Chesney, and my music doesn't fit in with his crowd at all." 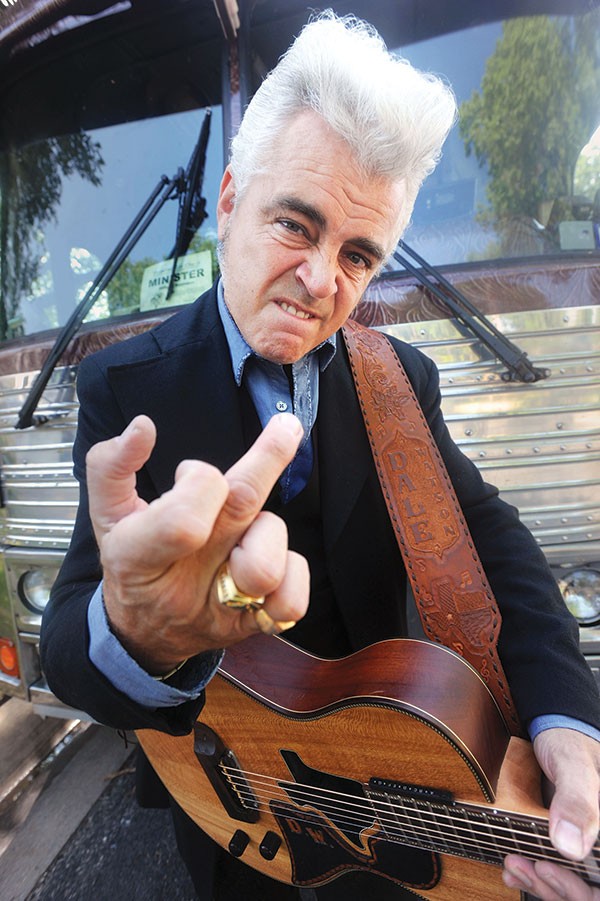 Dale Watson has given up on country music.

Not the sound, but the phrase. More specifically, the music that the phrase now stands for. And if you've listened to modern "country music" for more than a heartbeat or driven through the North Shore the morning after a Kenny Chesney bro-fest, you can hardly blame him.

It wasn't always like that for the 52-year-old honky-tonk troubadour. Over a career that has spanned more than 20 years and more than 20 records, Watson spent a lot of time fighting to take back the name. He rebelled against what country music had become — shallow pop songs stuffed with soulless, cheap hooks and played to a throng of so-called country-music fans who wouldn't know Ray Price from Ray Charles.

"You take a guy like Kenny Chesney, and my music doesn't fit in with his crowd at all," Watson told City Paper from his home in Austin, Texas, last month. "And the reason is, his music, and others like him, have zero connection to the roots of country music like Hank Williams and Johnny Cash."

Watson comes to town Jan. 16 for a show with the Rev. Horton Heat, the godfather of American psychobilly, at Altar Bar in the Strip District. The show will combine the unique styles of Heat (real name: Jim Heath), who plays an amalgam of punk rock, rockabilly and traditional country, and Watson, a quintessential honky-tonker.

"Even though we play different styles, you listen to the Rev. Horton Heat, and you hear that connection to the past," Watson says. "I've been to Jim's house. I've gone through his George Jones and Johnny Cash records. That's what I listen for. When you play records back to back — like Dwight Yoakam and Buck Owens or Johnny Cash and Hank Williams, Porter Wagoner and Roy Acuff — you can hear the root.

"That's what's missing today. Everything is firmly planted in mid-air. Mainstream country is the same thing that's playing on pop stations. They have no roots."

That's not an accusation that anyone could ever hurl at Watson. He was born into country music, growing up listening to and playing George Jones, Lefty Frizzell and Buck Owens with his father (a truck-driver and part-time country singer) and his brother, Jim. Watson's sound can be as varied and eclectic as the many voices that have come and gone in country music.

His catalog contains a wide variety of tunes that often reflect where he was at a particular time in his life. There are drinking songs ("I Lie When I Drink") and trucking songs ("Good Luck 'N Good Truckin' Tonight"), and songs about country greats ("Runaway Train"), and gospel songs ("Hand of Jesus"), and there are heartbreak songs ... oh man, are there heartbreak songs ("Crazy Again," "Time Without You," "Every Song I Write Is for You," "Elbow Grease, Spackle and Pine Sol").

Born in Alabama and growing up in Texas, he spent time trying to make it into the music business in Los Angeles and Nashville. But Austin was the place where he'd eventually find a home, and his biggest success.

His career began to take off in the mid-1990s with the release of his debut album, Cheatin' Heart Attack. The eighth cut on that record would not only become Watson's most famous, it would become an anthem to him and every supporter of traditional country music.

"I'm too country now for country, just like Johnny Cash," goes the most famous line of that tune, "Nashville Rash." It's a song he wrote at a time when Cash, arguably country's most well-known face and voice, didn't have a record contract. Things were bleak for the genre, but as bad as they were then, today is much worse, he says.

"Yeah, boy, when I think about that, I remember thinking, ‘Man, things can't get any worse," Watson recalls. "But boy, was I wrong. I was so wrong."

Watson has become so disenchanted with the genre that he has stopped altogether using the word "country" to describe his music. A few years ago he coined the term "Ameripolitan" to describe his music — "it's what the roots of country used to be," Watson explains. "If I tell people that I do country music, it gives people the totally wrong idea. So, now I tell them I do Ameripolitan, and I like to look at the blank look on their face. I tell them to pop by a show and you'll find out what that is."

This February in Austin, the Watson-founded Ameripolitan Music Awards will present its second annual event. The awards are determined by fan voting, and the show is paid for through crowdfunding. Categories include honky tonk, Western swing and rockabilly, and Watson himself is of course disqualified.

The inaugural show took place last year, one year after Watson got into a mini-feud with mainstream country artist Blake Shelton, who said that fans of traditional country were "old farts" and "jackasses." That led Watson to write a tribute song to Shelton with the line: "Well, I'd rather be an old fart than a new country turd." He set up the awards after that, to celebrate those who stay true the old ideals of country.

"People make a lot of sacrifices to make this music," Watson says. "A lot of it is pretty thankless, because you don't get the mainstream notoriety. It's our way to say thank you for doing this music."

Recognition is also something that Watson has been receiving in the past two years. In June 2013, Watson played live on the Late Show With David Letterman; he's also performed on Austin City Limits, and his album El Rancho Azul debuted on the Billboard country chart at No. 57.

"These really have been the best years of my career," Watson says. "Between those shows and the record ... listen, that's the only Billboard-chartin' record I've ever had, and it's kind of cool to have that, although I'll be honest, I certainly never thought that would happen."

If Watson never thought one of his records would chart on Billboard, maybe a broader audience for roots country music isn't too far behind. For his part, Watson says new fans are out there, but they're likely only going to come by growing the fan base organically.

"People are going to find this music the same way you found it, the same way I found it: through our parents," Watson says. "Our fans are not going to come from the generation of fans who are listening to the Kenny Chesneys and the Jason Aldeans and that mess. We're not going to get them.