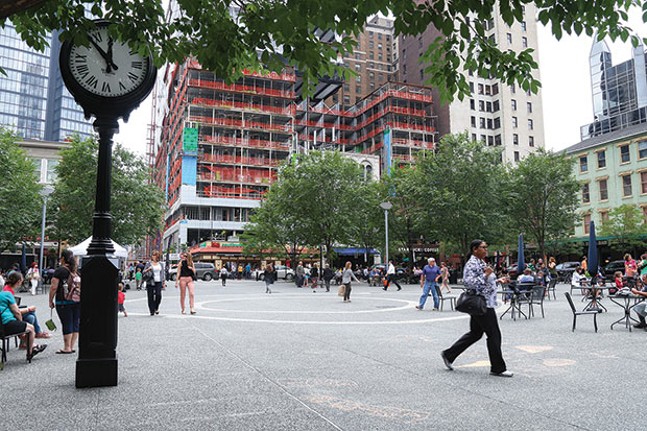 “Dearly beloved, we are gathered here today to get through this thing called life.” Dun dun dududu dun dududu...

You probably know those opening lines to Prince’s “Let’s Go Crazy” and the first scene in his landmark film Purple Rain. What you probably don’t know is that in 1984, when the song and film were released, I was far from 18 years old. Really. But this did not stop me from sneaking into my first R-rated movie.

Then, the old Fulton Theater on Sixth Street was just one of the many movie theaters easily accessible to the North Side. You could walk. Or you could take one bus.

Now, taking one bus to and from a location is an ever more elusive, almost magical occurrence. However, Pittsburgh’s ailing public transportation system is a topic for another column. This one is about Downtown, and for whom it is being renovated/innovated.

Someone recently told me Downtown is “so much better now than before.”

Before there were no good restaurants?

I am left to wonder if good restaurants are what a “so much better” Downtown is to other people.

The number of restaurants has increased, but the cultural culinary representation has hardly expanded to include everybody. Data from the U.S. Census Bureau shows Pittsburgh is 65 percent white, 25 percent black, 4 percent Asian, and 2 percent each of two or more races and Latinx. So, again, allow me to ask a question.

Do the entertainment, cultural and culinary options Downtown adequately reflect this multicultural population?

Downtown is moving away from being a centrally located mix of sociocultural economic activities for the many and into narrowly defined experiences for the few.

When someone says, “Oh, you can just shop online,” I reminisce about buying a pair of shoes for that evening’s event at Saks Fifth Avenue, getting new lipstick at Kauffman’s or — most especially — being inspired by amazing designers at Emphatics. Imagine a younger me flipping the pages of Vogue magazine, seeing Naomi Campbell wearing a Gaultier, reading “Jean Paul Gaultier, Emphatics, Pittsburgh, Pa.” and then being able to walk (run!) Downtown to see the actual garment in real life.

These experiences changed my life and inspired what I do.

They would not and could not happen today. But I can buy a taco from a few different places — and, to be fair, I do like tacos.

We must not dismiss the socioeconomic realities of our city.

When did it become a rule for central locations to have only one retail option based on income? What happens if all these great, new restaurants do not reflect the true cultural diversity of the city?

Who is it for?