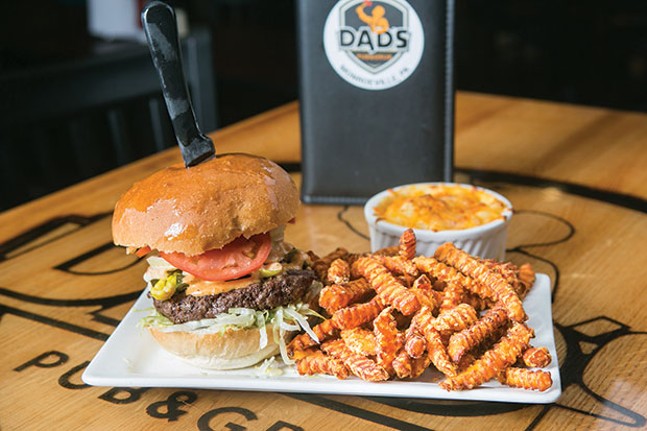 CP photo by John Colombo
The 10 oz. Big “E” burger with Cajun seasoning, peppers and hot pepper cheese, with a side of mac-and-cheese

Friday nights fall into two categories: “Bring on the weekend!” or “Wind down the week.” At some point, most of us slip gradually from one to the other. And for those for whom it matters, we can tell you that Dad’s Pub & Grub in Monroeville is comfortably on the chill end of the spectrum.

We’re not saying that such folks don’t want to have a good time on Friday nights (we certainly do). And we’re not saying, or even implying, that Dad’s isn’t a fun and laid-back kind of place (it is). Just that, while the combination of expansive beer selection and pub grub could signify that it’s time to party, the vibe — as you might expect from Dad — is most definitely about relaxing with friends or family and letting stress succumb to its mortal enemies, beer and melted cheese.

Speaking of which, the discerning eye will immediately recognize the former Pizza Hut that is now Dad’s. The venue is owned and operated by former managers of other popular casual eateries at its helm, and their experience stretches Dad’s offerings to include greater variety than most suburban taverns. There is a detailed hot-dog selection, fries that come fresh-cut or beer-battered, and an array of grilled-cheese sandwiches.

Honestly, it was all a lot to take in, and even ordering for four, we felt we’d barely scraped the surface. Jason still regrets that he didn’t try Dad’s original “Greuben,” which was available with corned beef or lamb. But we sure were glad we didn’t pass over the pub chips with wing dust. In the fresh-chip department, it’s really hard for restaurants to match the quality control of commercial brands, but Dad’s pulled it off, and the consistently crunchy result was utterly addictive, either straight or dipped in ranch. “Dog fish bites” had a lovely, light, almost fluffy Dogfish Head-beer batter, but the cod morsels lacked seasoning.

Spicy chili was Texas-style — bean-free — presumably better for topping hot dogs. As a solo dish, Angelique missed the pintos, but Jason thought the undiluted flavor of beef and spices was just right, although it was on the mild side for something proclaimed “spicy.”

It still would have enlivened the mac-and-cheese — available with chili or Buffalo chicken, though we ordered plain based on its billing as “Best.Mac.And.Cheese.Ever.” Its texture was impeccable, creamy and rich, but the flavor offered neither aged-cheese sharpness nor textural contrast from a bread-crumb or broiler-browned crust.

By contrast, wings with hot sauce were plenty fiery. Curiously available as either whole wings or halves, the pieces were a bit small and, perhaps as a consequence, less than succulent, but not at all bad. Next time we might try Kelvo style, which combines wing dust and mild sauce for extra flavor.

The extensive weenie menu contained some fresh ideas, like one with pepperoni, bacon, marinara, and Italian cheeses. A simpler bacon-cheese dog hit a lot of high points: The wiener itself was plump, juicy and unabashedly salty. The poppy-seed bun was fresh, the bacon was crisp with a bit of chew, and the cheddar sauce, while still not sharp enough for us, was creamy and just the right thickness to cling to the dog.

The same cheddar sauce pulled double duty on a menu special of turkey Devonshire, was a throwback to a dish invented in Pittsburgh in 1934. Substantial Texas toast was an appreciated upgrade from plain white bread, and Dad’s excellent bacon amped up the mild flavor of the turkey (and cheese).

That other all-American meal-on-a-bun, the burger, was decidedly not stadium-style. At a half-pound, the patty was juicy and tender, but with less charred flavor than we’d prefer. The Italian roll was up to the task of containing it; whether it could have handled the Yinzer Burger, topped with bacon and mac-and-cheese, we can only speculate. The side of fresh-cut fries were very nicely seasoned with herb-flecked Pub Rub. If they were a stage past perfectly golden, we found this preferable to the soggy side on which fries more usually err.

Even though our meal wasn’t perfect, we left satisfied. Whether framed as a bar to which we can take the kids, or as a family restaurant where adults can indulge in a couple of rounds, Dad’s was a great place for our family to relax into the weekend.

The Healing Center partners with a chef to educate about edibles