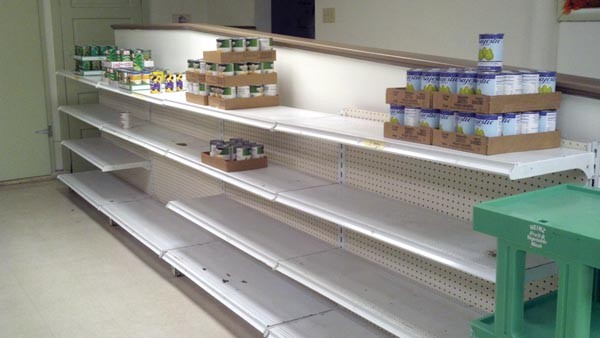 The food pantry's shelves at the Northside Common Ministries are missing a crucial staple: canned goods.

The cans used to come freely from the Greater Pittsburgh Community Food Bank. But the elimination of state funds in this year's budget forced the food bank to increase the food prices that it charges to the 400 community pantries that it serves.

"That's not outrageous. But it adds up," he says.

In East Liberty at the Corpus Christi Food Pantry, organizer Wanda Weber says it's the bread that she used to get for free from the food bank that she now must find a way to pay for — and she does. She says she understands the price increases are necessary.

"I beg, borrow and steal," she says, to make sure she meets the needs of roughly 130 people she serves monthly.

The price increases vary by category and source. But many items that once went to pantries at no cost are no longer free to acquire. While the food is technically not "sold," the food bank has added handling fees. In addition to the cost for canned goods, produce, for example, is now 3 cents per pound.

"As you can imagine for nonprofits across the board, it's a challenging time to continue to meet the need," says food bank CEO Lisa Scales.

The food bank's government funding has been cut about $500,000 this fiscal year; more than half of that is a reduction in a key state program, the State Food Purchase Program. The program sent about $1.4 million to Allegheny County last year to reimburse the food bank's administrative costs for handling the food it distributes.

At the same time, there are about 1,800 new households served each month, according to food-bank staffers.

The new cost structure could cause competition between the food bank and the community pantries for support. While Poliziani has gone to his neighborhood for help, Scales and pantry managers say there isn't a simple answer for where donations will help most.

"It has to be a personal decision for what people want to do," Weber says.