After a small fire, the shop's owners see their own generosity repaid 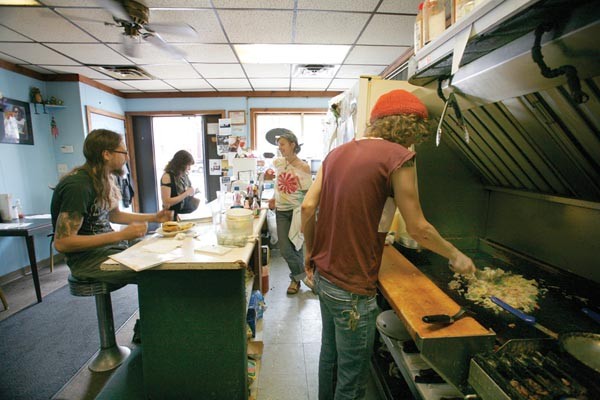 Photo by Heather Mull
Friendly and generous service has made the Bloomfield Sandwich Shop a customer favorite.

Less than a week after a small rooftop fire temporarily closed the institution that is the Bloomfield Sandwich Shop on July 2, Rosalyn Dukes found her role reversed.

Dukes, known to her customers as "Mama," and Mike Miller, a.k.a. "Papa," have co-owned the small diner at 4613 Liberty Ave. for almost nine years. They are known for their generosity — making sure everyone eats, even if they can't pay. It's a philosophy that has meant running the business and their personal lives paycheck to paycheck.

The fire was minor and damaged only a portion of the storage area; landlord Angelo Tabuso says it's still unclear what caused it. But, repairs to the building and the required city inspections as the work is completed means the eatery will be closed for at least a couple weeks. Unable to serve their customers, Dukes and Miller are also unable to pay their bills, they say.

Rosalyn's son put out a plea on the shop's Facebook page: "Mama Roz needs help!" An online collection netted just over $800, as of July 9, and plenty of offers of free labor to help get the restaurant's doors open again. (The sandwich shop hopes to re-open as early as Sat. July 14, according to a notice posted on the shop's door over the weekend.)

"[The offers were] almost immediate," she says. "By the time we got home that evening, there were emails and Facebook messages and texts on my phone and phone calls."

It's not the first time the shop's owners have seen their good turns repaid with kindness. In 2008, customers organized a benefit concert to help them stay in business, and raised $1,000.

"Families take care of each other," Dukes says. "We've helped a lot of people weather their storms, and now they're helping us weather ours."