This South Side Italian restaurant feels like both a family tribute and a polished, professional endeavor

Many a restaurateur has been inspired by a family tradition of gathering around a delicious meal, cooked by mom or grandma from a family recipe — a meal that filled the house with anticipatory aromas, and left family members with the lasting impression of food as a fundamental expression of caring.

The challenge lies in translating this touchstone experience for an industrial kitchen and a nightly crowd of strangers. Not only must the food remain true to rosy childhood memories, but the service, the decor and every other aspect must evoke the warmth of a home-cooked meal seasoned, served and savored with love.

Frank Vitale, who grew up spending Sundays in his grandfather’s vegetable garden and his grandmother’s kitchen, has realized his lifelong dream of cooking for others by opening Cucina Vitale, an Italian restaurant on the South Side. A portrait of his grandparents as a young married couple presides over the tiny dining room, anchoring Cucina Vitale to its origins in a boy’s love of family and food. But Frank Vitale put his money where his mouth is, as the saying goes, and grew up to become a professional chef. As a result, Cucina Vitale feels like both a family tribute and a polished, professional endeavor.

The menu is brief, befitting the one-man kitchen, but serves as a sort of précis of Italian-American cooking, ranging from humble beans-and-greens and popular chicken Parmesan to special-occasion splurges like veal chop and rack of lamb. And it’s not all clichés: Cucina Vitale is the only Italian place we know of locally to get crostelle, a sort of savory Calabrian funnel cake, and granchio, a pasta dish with crab, spinach, tomatoes, toasted pine nuts and feta. Bread and many other ingredients, including mozzarella, are made in-house.

That bread made a good first impression. Its crisp, flaky, but not too hearty, crust and tender, slightly chewy interior represented our ideal of Italian bread. It was superb with the dipping oil, which included shavings of garlic so thin as to be translucent, infusing the oil with gentle pungency.

Essentially fried bread dough, the crostelle was golden-brown outside and fluffy yet stretchy within, dusted with salt and finely grated Parmesan. It was good on its own and superb when dipped in marinara loaded with more nutty, grated Parmesan.

Parmesan, this time shaved, tipped the balance of flavors in a Caesar salad where it practically smothered the juicy hearts of romaine beneath. The dressing was refreshingly light, but could have used some more punch, whether from lemon, garlic or anchovy. House salads were simple but satisfying plates of mixed greens, cucumber slices, grape tomatoes and garbanzo beans in a light balsamic vinaigrette.

Many dishes featured roasted peppers. These sweet strips of red, yellow and orange bells, and sometimes spicy banana peppers as well, appeared as an appetizer with sausage; as a side with meats; and center stage in the linguini-with-peppers entrée, accented with garlic, basil and olive oil. Sausage and peppers is a classic combination here made extraordinary with handmade patties of Labriola’s sausage. The link was juicy and plump, browned without a hint of dryness or toughness.

Chicken Parmesan was less of a standout. Two full breasts in a fairly crisp breading held their own as the basis of this dish, but a pedestrian marinara did little to enhance them. The linguine, a bit flatter than most, were delightful, however, light and tender. 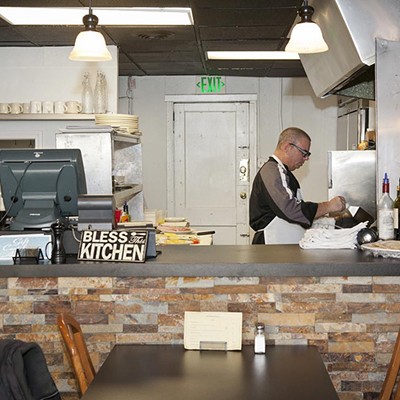 
The same noodles were also the best part of the linguini granchio. This enticing combination, heralded by our server as her favorite, didn’t quite soar for us. The flavors blended well but somehow failed to add up to more than the sum of their parts.

We had no such reservations about the rack of lamb. It couldn’t have been more beautifully cooked, nor the cut of higher quality. The meat was rosy and tender, the exterior lightly charred, and the sweet sauce was subtle and balanced, neither heavy nor cloying.

Ideally, with such a brief menu, everything would have been this perfectly executed. On the other hand, we were impressed at how much such a tiny kitchen could accomplish. Cucina Vitale also serves lunch and breakfast, with a roster of great-looking sandwiches and frittatas. Frank Vitale has done his grandparents proud.