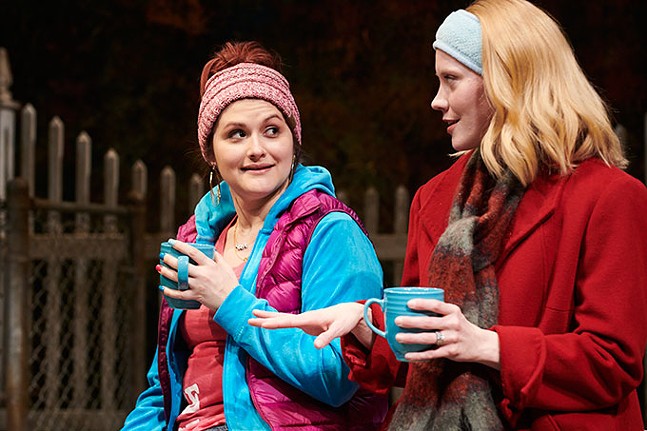 Parenting is a difficult enterprise and full of uncertainty. Am I doing what is best for my children, myself, and tending to the needs of my partner? And is my partner doing what is right for our children? The questions never stop and there are no definitive answers. But there is help in companionship, and that is one of the many issues award-winning playwright Molly Smith Metzler touches on in her anything-but-reassuring play Cry It Out.

The play is set in the shared Long Island duplex backyards of Lina (Julianne Avolio) and Jessie (Sarah Goeke). It is evident early on that they have drastically different backgrounds. As the two bond over the struggles of raising newborns, they share the common details that come out during casual conversations over coffee, frequently to the subtle dismay of the other. Jessie is a married, well-to-do lawyer on maternity leave. Lina isn’t married, has a thick Long Island accent (perfectly executed by Avolio), and half-heartedly tells Jessie that she thinks that her live-in boyfriend might someday propose. The intentional economic disparity between the two implies that beyond both having newborns, they have very little in common.

As the two share coffee, stories, and a backyard area, they grow closer and closer. Just as they start hitting their neighborly stride, a man we soon find out is Mitchell (Tim McGeever), storms into their backyard in an alarmingly harried fashion. He’s wearing a pair of wireless over-the-ear headphones and is completely out of breath. Lina and Jessie have no idea what to make of the man who erratically drove his car almost directly into their backyards and discuss the oddness of the situation as Mitchell paces back and forth and tries to speak to the women. Mitchell then speeds off as quickly as he arrived only to return a short time later after Lina and Jessie get some barbs in about his strange behavior.

Mitchell gets his wits about him long enough to tell the women that he lives up on the hill, pointing to one of the big, silhouette houses that rises high above the set and asks them if his wife, who had recently given birth, too, could join them during their “coffee klatch.” Lina is vocally dismissive while Jessie, perhaps too nice for her own good, tells Mitchell that it would great if Adrienne (Rebecca Hirota) would join them. 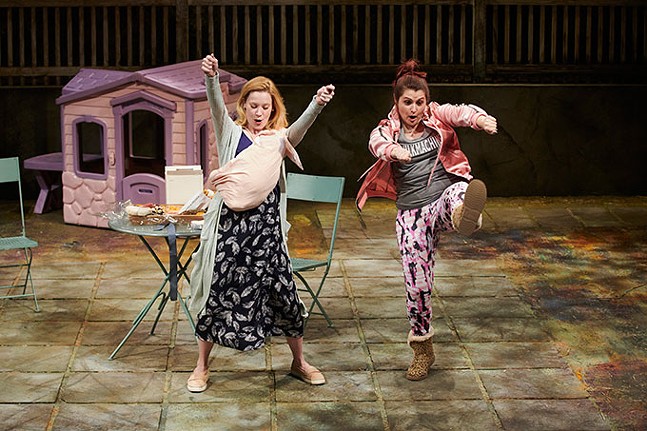 When Adrienne arrives to the backyard for what feels like a playdate set up by Mitchell, no one is there. But the table that has been there for the entire show is now filled with treats from Dean & DeLuca, courtesy of Mitchell. And Adrienne is not impressed by his gesture. When the two women show up and introduce themselves to Adrienne, the audience learns just how much Adrienne does not want to be there as she barely looks at them and dismisses many of their questions.

The show then hits fifth gear as all of the characters begin to share uncomfortable truths about themselves, their relationships, and parenting. There is no tidy conclusion for any of the characters in Cry it Out, and that feels like the entire point. The honest performances and tight writing suggest that life is hard. While there are good times and bad times, there are certainly no guarantees.

Editor's note, March 12: The remaining performances of Cry It Out have been canceled in response to the coronavirus.