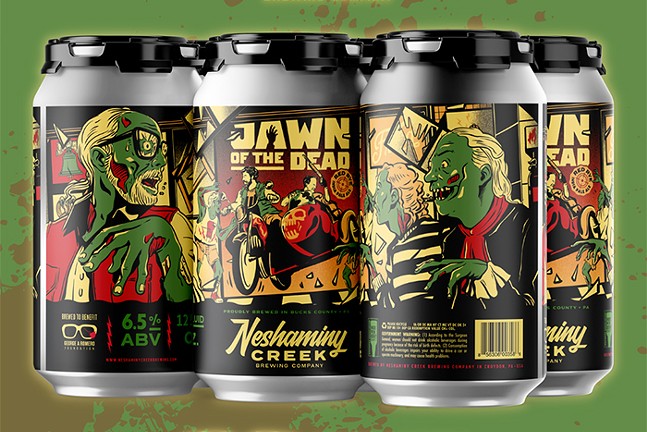 Even on the most adventurous of brewery tap lists, it’s difficult to find a Red Rye IPA. An IPA brewed with 20% rye malt isn’t exactly the norm nowadays; some would say the style is almost dead. That's what makes it perfect a tribute to late Night of the Living Dead director George A. Romero.

On Fri., Sept. 9, Neshaminy Creek Brewing, based outside of Philadephia in Croydon, Pa., will release its new JAWN of the Dead beer in partnership with the George A. Romero Foundation. A spin-off of their flagship JAWN Pale Ale, this variation is brewed with Apollo, Eukanot, Mosaic, and Nuggets hops, giving it a mixture of bitterness and fruit.

A press release describes JAWN of the Dead's "icy, undead" body as "bready and toasty with a spicy bite that accentuates a pronounced bitterness, adding, "There is no escape from the notes of pine, berries, and grilled tangerine."

“One of the most rewarding aspects of working in the craft brewing industry has been the ability to collaborate with so many different communities," says Neshaminy Creek's logistics manager Kevin Day. "We continue to think outside of the box and because of that have been able to support the arts and collaborate with fantastic musicians, a drive-in movie theatre, and now a legendary name in the film industry."

An avowed horror fan, Day says the opportunity to work alongside the Pittsburgh-based George A. Romero Foundation was a "no-brainer."

"This is our way to celebrate the work of a pioneer in the horror genre and give back to a community that thrives on creativity, innovation, and doing it yourself,” adds Day.

To coincide with the release, Neshaminy Creek’s Croydon taproom will host a special Night of the Living Dead screening, complete with a zombie costume contest.

For those in the Pittsburgh area, fear not; the beer will see distribution throughout Pennsylvania, as well as New Jersey, Delaware, and Maryland.

The beer also serves a good cause. A total 10% of the proceeds will help further the George A. Romero Foundation's stated mission of inspiring a new generation of filmmakers and artists, as well as preserving and restoring Romero’s work and legacy.

The chance to bring a long-lost style back to life was just icing on the cake, a perfect opportunity for a resurrection worthy of the filmmaker himself. Rye has been in beer since the 15th century, but finding American breweries that specifically utilize the grain bill necessary to qualify as a Red Rye IPA limits to Founder’s Brewing, and that’s about it.

However, as breweries and consumers alike are trying to find more and more ways to move from purely Hazy IPAs and diversify their tap list, this was a perfect opportunity. So get your hopefully not ice-cold hands on some JAWN of the Dead when you can.