One of the things we love most about Pittsburgh is its compact size. We're not talking about the six-degrees-of-separation, running-into-everybody-you-know phenomenon. We mean actual, physical size. While the suburbs do sprawl in some directions, other areas close to the city are blissfully rural. For instance, the Laurel Highlands are a scant hour away, working farms lie just outside city limits, and, just a hop, skip and a bridge from East Liberty, you can enjoy old-fashioned fine dining at a former stagecoach stop, the Cross Keys Inn.

An historic landmark built around 1850, the Inn has recently been renewed by a pair of brothers well known for an altogether different dining scene: Laforêt, the venerable French restaurant in Highland Park that was the height of anniversary-dinner sophistication until it closed a couple of years ago. The allure of genteel decay convinced Robert and Michael Urrichio to revive the dated -- and dilapidated -- Cross Keys Inn, the last incarnation of which also closed a few years back.

Now spiffed up with new finishes, the inn still offers plenty of historic character, from the steep center hall steps to the intimately tiny dining rooms upstairs, each of which was a single bedroom back in stagecoach days. Downstairs, the small saloon is charming, but the room that made us want to move in was the lounge, complete with buttery club chairs, leather-bound books and a real, crackling wood fire.

We dined in the larger upstairs dining room, papered with English hunt scenes. The menu, a deliberate departure from the Urrichio's past, is best described as a gently updated take on classic American cuisine. Certain dishes, such as a maple-glazed pork chop, would have been at home on Fanny Farmer's table, while others, including seafood in vanilla-butter sauce, are clearly modern without being shockingly so. In keeping with the rambling residential setting, equally suited to formal dinners and after-work cocktails, pasta dishes are available in half portions, and the back page of the menu features what might pass for bar food: burgers, panko-crusted chicken, and macaroni and cheese.

We each started with soup. Baby lentil, spinach and sweet sausage soup was less a lentil soup accented with sausage, as we had expected, than the other way around. Unfortunately, the lentils would have lent more body if there had been more of them. The broth, however, was dark, herbal and savory, a medium well suited to the assertive sausage. Chicken-and-dumpling soup showcased a superb broth, completely infused with the mild flavor of chicken meat, not grease. The vegetables were tender, if not soft, while the meat was perhaps a touch tough. But the eggy dumplings were almost airy.

We also enjoyed an appetizer of curried shrimp fritters which were fried quickly so as to be extra-crispy without and delectably creamy within. Good as these were, their bed of slaw stole the show: light, juicy and tangy, it put mayonnaise-based, picnic-grade coleslaws to shame.

Angelique's entrée featured grilled Elysian Fields lamb loin chops that were thick but tender. The strong, sharp notes of their garlic, rosemary and mustard marinade mellowed in the cooking so that the lamb's distinctive native flavor took center stage.

Jason could not resist the Cross Keys burger, eight ounces of Kobe and Angus beef, grilled and topped with pulled pork, caramelized onions, apple-smoked bacon and cheese (he chose provolone). It was just as decadent as it sounds, and he could only eat half. The Angus lent welcome structure to the tender Kobe, the bacon contributed its smoky flavor without being overassertive, and the pulled pork was tender, moist and meaty enough to deserve its own sandwich. The only disappointment, although not one that would keep us from ordering this again, was that the potato frites failed to live up to their name: They were crisp enough, but their color ranged from blond to brown, more like common fries.

Our dessert of pear crisp, sweetly satisfying in its own right, crossed into the realm of extraordinary with the addition of homemade Madagascar vanilla ice cream. The king of vanillas, Madagascar vanilla's velvety and intense flavor made this ice cream anything but plain.

While the setting and atmosphere of Cross Keys Inn evokes a country B&B, the food is sophisticated and urbane. The Urrichio family's years of experience has been distilled into dishes that offer rich flavors without heavy preparations or gimmicky ingredients. If a weekend getaway isn't in the cards, may we recommend an evening at Cross Keys Inn? We'll be in the lounge. 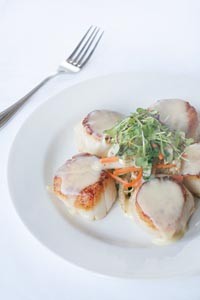