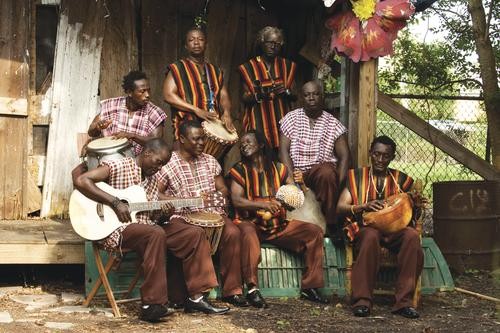 The music of Sierra Leone's Refugee All Stars ranges from traditional West AFrican folk music -- polyrhythms and lots of drums and vocals -- to a much more contemporary mix of reggae and highlife. It's good stuff. But the most remarkable thing about the band is its story: The members met as refugees from Sierra Leone's bloody 1990s wars, began playing music together and were the subject of a 2005 documentary before their first album, Living Like a Refugee, was released by ANTI- in 2006. The band is touring now in support of its latest release, Rise & Shine; it appears tonight at the Rex Theater. With Tom Bachelor Band. Andy Mulkerin 7 p.m. 1602 E. Carson St., South Side. $15. 412-381-6811 or www.rextheater.com

Given Danzig plays tonight at Stage AE, and the Pirates play tonight at PNC Park, there is a chance, if ever so slight, that Glenn Danzig will be within earshot if and when catcher Ryan Doumit walks up to the plate, as he does every time, with "Mother" playing on the stadium sound system. Another possibility is that Doumit, feeling underappreciated as he continues to see limited playing time, May simply sneak out of the dugout and run over to Stage AE to catch the band live. The only way to find out? Go to the show. Or the game. Or both. Devildriver and 2Cents open. AM 7 p.m. 400 North Shore Dr., North Side. $25-27. All ages. 412-229-5483

Cave In began in the mid-'90s, playing metalcore and signing to Hydra Head Records, the roster of which at the time included Piebald and Converge. The band reached its popular peak in the early 2000s, signing to RCA for one release then returning to Hydra Head in subsequent years. More recently, Cave In has been elusive -- calling it quits for a while, then recording and touring again, and teasing us that they might not be hitting the road so much in the future. Keep that in mind when you decide whether to check the band out tonight at Altar Bar; openers include La Dispute, Defeater, Native and Former Thieves. AM 6 p.m. 1620 Penn Ave., Strip District. $15. All ages. 412-263-2877

Last summer, My Cardboard Spaceship Adventure released Before You Change the World ..., a 25-minute EP of six smooth pop-punk tunes. It was its second release, but the first as a full band -- the previous recording was basically put together by frontman Mikey Meiers. More recently, the local band has worked on building a local following, and this week it takes off on a short tour around the mid-Atlantic region. Tonight is the tour kickoff, at The Smiling Moose: The band headlines a bill that also includes Fishing for Missiles, Music From Another Room and Call Us Kings. AM 5:30 p.m. 1306 E. Carson St., South Side. $8-10. All ages. 412-431-4668 or www.smiling-moose.com