Local shows by Dessa, The Afghan Whigs and Jill Barber, plus a GLCC benefit with Joe Stevens and a once-in-a-lifetime local show from Balkan brass legend Boban Marković

Dessa, a.k.a. Dessa Darling of Detroit's Doomtree hip-hop collective, got her start as a spoken-word artist in the Minneapolis scene. She released her first solo album in 2005, and has since produced three more LPs, as well as four books of her written work. Dessa's poetic sensibility transforms into eerie lyricism and narratives, most recently showcased on her 2013 album Parts of Speech. She forges seamless transitions between rap and song that land somewhere in the realm of a musical spoken-word performance. You'll find her along with alternative hip-hop group Why? tonight at Altar Bar. Samantha Ward 7 p.m. 1620 Penn Ave., The Strip. $13-15. All ages. 412-206-9719 or www.thealtarbar.com

Good vibes and a good cause pervade tonight at Cattivo, where Music Night on Jupiter and the Gay and Lesbian Community Center have teamed up to present a show headlined by Joe Stevens. The singer-songwriter, now performing solo, grew to notoriety fronting the band Coyote Grace. Also playing tonight are Brooklyn's Great Caesar and Boston's Night Lights. A portion of the proceeds goes to Cathy's Closet, a personal-care pantry run by the GLCC. Andy Mulkerin 8 p.m. 146 44th St., Lawrenceville. $10. 412-687-2157 or www.cattivo.biz 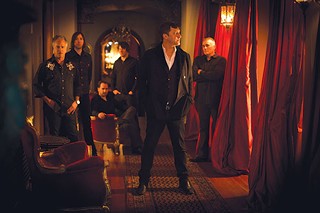 The Afghan Whigs have come out with their first all-new album in 16 years, Do to the Beast, as well as a revamped version of their 1993 album Gentleman. From its origins in '80s garage punk, the Cincinnati band quickly rose to become one of the most critically-acclaimed alternative rock groups of the '90s. Greg Dulli and company have a tenure in the music scene, perhaps making it either disconcerting or absolutely amazing to hear the influence of a 16-year hiatus on a familiar sound. You have the chance to relive some of that revamped '90s rock tonight at Mr. Small's Theatre. SW 7 p.m. 400 Lincoln Ave., Millvale. $30. All ages. 412-821-4447 or www.mrsmalls.com

Canadian chanteuse Jill Barber started her career as a singer-songwriter with a guitar, then morphed into a torch singer with a classic sound and full orchestration. On her latest, Fool's Gold, the strings are still there, but more horns pop in, giving some of her songs more of a soul feel. She and her band are charming live, and land in what might be the city's best venue for such an act — the cocktail-room atmosphere of Club Café — tonight. Heather Kropf opens. AM 7 p.m. 56 S. 12th St., South Side. $13. 412-431-4950 or www.clubcafelive.com

Brass-band music, inspired by traditions from everywhere from Latin America to Eastern Europe, has been more and more visible locally lately — and tonight, fans get the chance to see one of the masters at work. Boban Marković has long been one of the leading names in Serbian brass-band music, and he appears with his Boban i Marko Marković Orkestar tonight at the Rex Theater, in a show put on by The Consortium, Pandemic and VIA. The band is led by Boban and his son, Marko; stranger things have happened, but chances are you won't get another chance to see this act here in town. Lungs Face Feet and the Pandemic DJs open. AM 7 p.m. 1602 E. Carson St., South Side. $16-20. All ages. 412-381-6811 or www.rextheater.com