Local shows by Lovers, Wild Belle and The Men, plus the Yep Roc Halloween tour comes to Altar Bar

Singer-songwriter Carolyn Berk's poetic lyrics have touched the hearts of many over the years, especially registering with those in the LGBT community. Blending a feminist outlook with sonic and lyrical complexity, her Portland-based band Lovers has recently been incorporating more synth and electronic sounds into its bedroom-pop music. The trio — comprising Berk, producer Kerby Ferris and percussionist Emily Kingan — released A Friend in the World this year as a follow up to its much-loved Darklight, released in 2010. Lovers perform tonight at Brillobox as part of the Operation Sappho dance party. Allison Cosby 9 p.m. 4104 Penn Ave., Bloomfield. $10. 412-621-4900 or www.brillobox.net 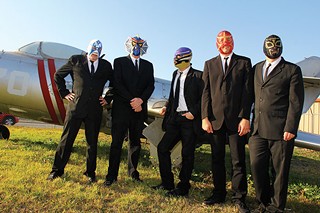 Local bands getting together for Halloween shows is old hat; national touring bands going all-out for the holiday? That's something special. Three longtime rock bands — The Fleshtones, Southern Culture on the Skids and Los Straitjackets — combined forces this year to create Mondo Zombie Boogaloo, a collaborative album of spooky tunes for Halloween. The three bands are touring together in support of the record, and appear tonight at Altar Bar. Andy Mulkerin 5:30 p.m. 1620 Penn Ave., Strip District. $19-20. 412-206-9719 or www.thealtarbar.com

Wild Belle isn't your typical family band. The children of musicians, Natalie and Elliott Bergman came together this year for their first official collaboration after years of being in and out of each other's musical lives. In college, Elliott was part of an Afrobeat band called Nomo, and his younger sister began singing back-up vocals for the group when she was just 16. Now her vocals are at the forefront, and the Chicago natives make mellow indie pop, infused with bits of reggae, jazz, West African and psychedelic music. The duo plays at Rex Theater tonight with Saint Rich. AC 8 p.m. 1602 E. Carson St., South Side. $12-15. 412-381-6811 or www.rextheater.com

The bashing, thrashing punk of Brooklyn's The Men has blossomed into a mix of guitar-centered indie rock, Neil Young-style stuff and ... bashing, thrashing punk. But while the three-piece strayed only a bit from its wheelhouse on last spring's full-length New Moon, what's truly different is its new EP, Campfire Songs, which is exactly what it says it is — a set of songs, some versions of tunes that are on New Moon, that were recorded unplugged around a campfire during the New Moon recording sessions. Maybe don't expect them to be sitting on stools with acoustics like Crosby, Stills and Nash when they play Club Café tonight, but the versatility is admirable. Purling Hiss, locals Old Head and Pampers open. AM 8 p.m. 56 S. 12th St., South Side. $10. 412-431-4950 or www.clubcafelive.com