Following an instrumental album recorded inside the Coyote Gulch canyons in Utah, and a collection of Handsome Family covers, Andrew Bird’s latest, Are You Serious, feels like both a return to form, and a barer-than-usual peek at the man himself. In the last few years, the multi-instrumentalist — known for his unique violin style and Dylan-esque lyrical riddles — got married and had a kid. Bird has said that marriage has changed his writing style in some ways, but where some might settle into the banalities of family life, he taps into the intensity. See him tonight when he performs at the Byham Theater, and read our Q&A with Bird at FFW>>, the music blog at www.pghcitypaper.com. Margaret Welsh. 8 p.m. 101 Sixth St., Downtown. $42.75-49.75. All ages. 412-456-6666 or www.trustarts.org 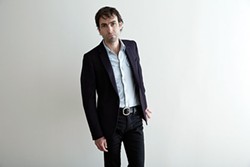 For two decades, Joan of Arc — the well-loved experimental project of Tim Kinsella and a cast of rotating musicians — has made eclectic, genre-melting albums that loop, riff and twinkle in unexpected ways. Tonight, the band brings its 20th anniversary tour to Brillobox. Opening are Pittsburgh’s own Boys and Highdeaf: Boys, much like Joan of Arc, create a distinctly noisy experience that will pull you between air-guitaring and thrashy head-banging. Highdeaf, in turn blends mathy metal with noodling riffs and a dash of blues. Meg Fair 9 p.m. 4104 Penn Ave., Bloomfield. $10-12. 412-621-4900 or www.brillobox.net 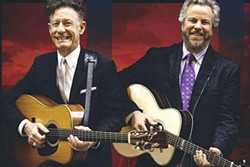 Singer/songwriters Lyle Lovett and Robert Earl Keen have been friends since 1976, when both were students at Texas A&M University. The two would sit on the porch of a rental house and play music. They collaborated on a song about that porch, which Lovett recorded on his first record under the title “This Old Porch.” Keen did the same and called it “The Porch Song.” Listen to both and you’ll notice that, while the words are the same, each song is distinct. And you might get to hear both versions live when the two men get together for an acoustic show at Greensburg’s Palace Theater; most certainly you’ll get to hear a story about it. After all, that’s the point of the tour: two old friends sitting down with their guitars, singing songs and swapping stories. Charlie Deitch 8 p.m. 21 West Otterman St., Greensburg. $48-88. All ages. 724-836-8000 or www.thepalacetheatre.org

Haybaby makes the kind of music you’d want to listen to while having a quaint picnic in Allegheny Cemetery on a temperate fall afternoon. The Brooklyn-based band released Sleepy Kids last year on the label Tiny Engines, and the record is a careful blend of sludge and honey. Tracks like the noisy “Edelweiss” and “Her,” with its grooving brightness, show the spectrum of Haybaby’s songwriting. It is quietly smart, simple and thoughtful. Opening this all-ages party at the Mr. Roboto Project are space rockers YRS, experimental post-punk band Rainbow Machine and twinkle-folk ensemble Yes Yes a Thousand Times Yes. MF 8 p.m. 5106 Penn Ave., Bloomfield. $5. All ages. www.robotoproject.org