Local shows by Rubblebucket, Blonde Redhead and Timeghost, plus Halloween at the Cantina with Brenmar, and a jazz event at the Heinz History Center

Sure, there are 101 costume parties you could be attending tonight, but maybe a better bet is to hit up Round Corner Cantina for a top-notch DJ party instead. Yes, OK, people will probably be dressed up there, too ... it's a free country. The focus is on the music, though: New York City-based Brenmar, a DJ and producer who's toured the world, headlines, with favorite locals Edgar Um and Bamboo warming things up. Andy Mulkerin 9 p.m. 3720 Butler St., Lawrenceville. $10 after 10 p.m. 412-904-2279 or www.roundcornercantina.com

It's jazz on an autumn day at the Heinz History Center today, as the Smithsonian-affiliated museum holds an event called Places of Invention: Pittsburgh Jazz, 1920-1970. The event puts together guest speakers, live music and film, as well as an interactive element using tablet computers; notables like Nelson Harrison and MCG Jazz's Renée Govanucci will be on hand as part of the program. New History Center-produced videos on Pittsburgh's jazz history will premiere as well. AM 10:30 a.m.-2 p.m. 1212 Smallman St., Strip District. Event free with museum admission ($6-15). All ages. 412-454-6000 or www.heinzhistorycenter.org

Rubblebucket was formed from a couple parts of John Brown's Body: Trumpeter Alex Toth and vocalist/sax player Kalmia Traver parted ways with the reggae group of that name in 2007. The indie-dance duo quickly released its debut, Rose's Dream, under the name Rubblebucket Orchestra. Afterward the band dropped the "orchestra" from its name but increased in personnel. Since then, it's released three more full-lengths, most recently Survival Sounds, with Communion Records, in 2014. Catch the band with Landlady tonight at the Rex Theater. This music can make anything with a pulse dance, so get ready to groove. Samantha Ward 8 p.m. 1602 E. Carson St., South Side. $15. All ages. 412-381-6811 or www.rextheater.com 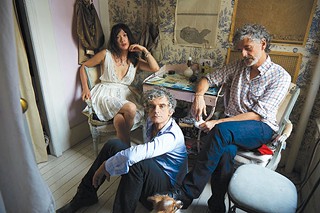 If the band Blonde Redhead were a person, she would have just become eligible to legally drink. The group was formed when Japanese art students Kazu Makino and Maki Takahashi randomly met twin brothers Simone and Amedeo Pace in a New York Italian restaurant. After this coincidental formation, the group's chaotic rock intrigued Sonic Youth drummer Steve Shelley enough to produce and release its debut album on his label in 1994. Takahashi has since left the group, but Blonde Redhead has produced nine albums in the past 21 years. The band will undoubtedly be playing new material from 2014's Barragán tonight at Mr. Small's Theatre. SW 8 p.m. 400 Lincoln Ave, Millvale. $17. All ages. 412-821-4447 or www.mrsmalls.com