The folks known as Mr. and Mr$. Funky -- he also goes by Unfinished Symphonies -- have been a weird fixture on the local rock scene for more than a decade. The show they host tonight at Howlers is par for the course: Called Blinding You With Science, it combines a rock show and physics experiments. The science isn't completely planned out yet, but Mr. Funky says it'll involve sound waves at times, and a paper-airplane contest. In addition to the Funky couple, The Skirt Tasters and Ag Ag Lady perform. AM 9 p.m. 4509 Liberty Ave., Bloomfield. $5. 412-682-0320 or www.howlerscoyotecafe.com

If you see a bow-tied man lurking on Penn Avenue tonight, don't fret: It's just Mr. Saturday Night. That's piano pop singer Julian Velard, who's toed the line between indie and mainstream popularity for the past few years; he took on the Mr. Saturday Night character when he released the album of the same name this year. He plays tonight at Most-Wanted Fine Art; Sharon Little and Dan Friedson open. AM 8 p.m. 5015 Penn Ave., Garfield. $7. All ages. 412-328-4737 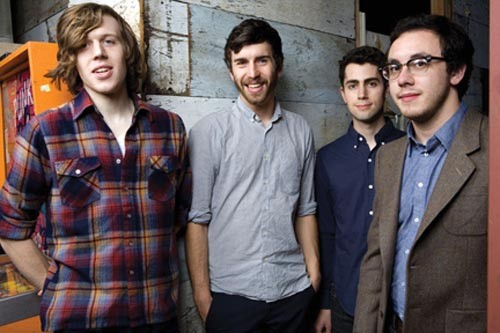 Born in 2005 for the purpose of pure fun, Tokyo Police Club has risen to the heights of indie-pop stardom and landed on the lineups of such festival heavyweights as Lollapalooza and Glastonbury. Despite the success, the fun never left the band's sound; it remains sprinkled with sugary pop covers of Miley Cyrus and Jimmy Eat World songs.  1,2,3, the Frenchkiss-signed project of Pittsburghers and former Takeover UK bandmates Nic Snyder and Josh Sickels, will open tonight's show at Carnegie Mellon University. Kate Magoc 8 p.m. Weigand Gymnasium, Carnegie Mellon University, Oakland. $10 (free with CMU ID). 412-268-2000 or www.activitiesboard.org

Simply put, the music of Prince Rama is a holy mindfuck. The Florida-by-way-of-Brooklyn duo (formerly a trio) makes a racket that consists of chants, gamelan-style jams, moments of quietude and psychedelic synth riffs. Sisters Taraka and Nimai Larson released Trust Now, the band's latest, on Animal Collective's Paw Tracks imprint earlier this year, but their performance tonight at The Shop might be a bit too weird for the average Animal Collective fan. Those into Eastern religion, ritual and the truly unconventional won't want to miss it. With Indian Jewelry and locals Brother Ong and White Reeves. AM 8 p.m. 4314 Main St., Bloomfield. $7. All ages. 412-951-0622