Last year, Wreck Loose burst onto the local scene with its debut EP full of piano-driven melodic pop music. After a year of playing plenty of shows both locally and elsewhere, the band returns tonight to Brillobox with a new 7-inch single, "Feed Me" (backed with "Only You"). With classic AM-radio-style songwriting (think Elton John and Jackson Browne) and the chops to back it up, the band is worth checking out live; Josh Verbanets and The Commonheart play tonight as well. Andy Mulkerin 9 p.m. 4104 Penn Ave., Bloomfield. $10. 412-621-4900 or www.brillobox.net

After 2011's Walk of Shame full-length, we didn't hear much from budding country starlet Nikki Lane for a bit — disappointing given the Nashville songwriter's natural talent and swagger. Little did we know she was hard at work on this year's All or Nothin', the Dan Auerbach-produced LP that's been her ticket to mainstream notoriety (including a live slot on Conan). Tonight, she makes her Pittsburgh debut at the Hard Rock Café, touring with Jamestown Revival and Hollowood. AM 9:30 p.m. 230 W. Station Square Drive, Station Square. $13-15. 412-481-7625 or www.hardrock.com

It's called Handel's Occasional Oratorio not because it's only performed every now and again — though that's true — but because the German-turned-British composer put it together for a special occasion: England was preparing for invasion by Charles Edward Stuart and the Scots. No such event has occasioned the Bach Choir of Pittsburgh's performance of it tonight (and tomorrow) — at least not that we know of. It's just a lesser-known Handel work that artistic director Thomas Douglas wanted to bring to a Pittsburgh audience. AM 8 p.m. Also 4 p.m. Sun., Nov. 16. East Liberty Presbyterian Church, 116 S. Highland Ave., East Liberty. $9.95-30. All ages. 412-241-4044 or www.bachchoirpittsburgh.org 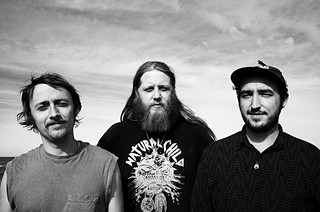 Natural Child has been pouring out laid-back Southern rock since 2009, when bassist Wes Taylor and drummer Zack Martin of The Turbo Fruits teamed up with guitarist Seth Murray. The trio added Benny Divine and Luke Schneider in 2013 and shows off new sounds in 2014's Dancin' With Wolves. But don't worry if you're not feeling that album: The group plans another release by the end of the year. Natural Child plays The Smiling Moose tonight with Act of Pardon. Samantha Ward 10 p.m. 1306 E. Carson St., South Side. $8-10. 412-431-4668 or www.smiling-moose.com

Caroline Smith exudes that particular '80s flavor of girl power you may not have known you've been missing. The young pop star comfortably merges R&B and neo-soul with her indie-rock roots. Her third and most recent album, Half About Being a Woman, is all about self-acceptance and her growth from girl into — you guessed it — a woman. You can see her tonight at Club Café with A.G. Levine and Circles and Squares. SW 8 p.m. 56 S. 12th St., South Side. $10. 412-431-4950 or www.clubcafelive.com