Perhaps best known as an electric jazz guitarist, Ross Hammond performs a solo acoustic set tonight at Acoustic Music Works with local guests Daryl Shawn and Pairdown. Hammond’s renditions of folk and gospel standards and his open-tuned slide playing recall John Fahey’s style of American primitive guitar, which explores obscure blues tunings and a balance between traditionalism and experimentation. Hammond’s acoustic stylings show that, as a guitarist and improviser, he cannot so easily be pinned down as just a jazz musician. Andrew Woehrel 8 p.m. 2142 Murray Ave., Squirrel Hill. $10. 412-422-0710 or www.acousticmusicworks.com

Jane Lee Hooker is not, in fact, the daughter of the legendary bluesman John Lee Hooker, but rather an all-female blues band. Jane Lee Hooker doesn’t shy away from the standard blues-rock formula, but the band’s attitude, which combines an almost-riot-grrrl punk energy with cock-rock machismo, makes for an interesting dynamic. And this New York City-based five-piece is hardly new to the game: The lineup includes ex-members of Nashville Pussy, Bad Wizard and Wives. See Jane Lee Hooker tonight at Moondogs. AW 8:30 p.m. 378 Freeport Road, Blawnox. $10-12. 412-828-2040 or www.moondogs.us

Although it is sometimes referred to as avant-classical, the Eric Rich Ensemble is less like a classical group than a post-rock band. The group fully welcomes comparisons to Godspeed You! Black Emperor and Sigur Rós; Rich, a self-taught pianist and composer who hails from Salt Lake City, also found early inspiration from minimalist composer Steve Reich. Tonight, the ensemble — which combines cinematic, emotional string sections with bright, reverby Telecaster arpeggios — performs at the Irma Freeman Center, along with locally based improvisational pianist Dubravka Bencic. And it’s worth noting that the group doesn’t do that constant drum-roll thing that every post-rock band of the previous decade did, which is perhaps why it’s still considered a classical group. AW 7 p.m. 5006 Penn Ave., Bloomfield. $10. 412-924-0634 or www.irmafreeman.org 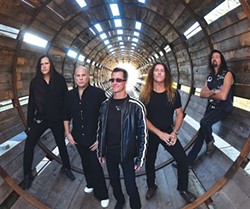 I was going to say something about how it’s sort of a tradition in the world of metal to have the word “metal” in your band name, and I was going to make the point that you can trace that tradition at least as far back as Metallica, but Metal Church has actually been a band for even longer. (Metal Church formed in 1980, while Metallica got together a year later.) Unlike Metallica, Metal Church never became a household name. But also unlike Metallica, it never became a joke. The band is still playing early-’80s-style thrash metal (singer Mike Howe recently rejoined the lineup), and it’s still garnering love from metal heads — the heavy-music experts at Decibel magazine described elements of the band’s new record, XI, as “sublime.” Metal Church plays tonight at Altar Bar, with Hatchet, Vermithrax and Talion. AW 8 p.m. 1620 Penn Ave., Strip District. $17-20. 412-263-2877 or www.thealtarbar.com