Local shows by Jesse Dee, Punch Brothers and Bend Sinister, plus a benefit to remember aspiring rapper Aaron Wellons, and a CD-release for Girls Rock! Pittsburgh

Last year's On My Mind/In My Heart, the full-length that put Boston-based soul singer Jesse Dee on the map, was a pleasant surprise. The vintage sound is natural, not forced; Dee's swinging numbers recall Van Morrison at his jazziest. He's a charmer live, and brings his band to Thunderbird Café tonight. Andy Mulkerin 9 p.m. 4023 Butler St., Lawrenceville. $12-15. 412-682-0177 or www.thunderbirdcafe.net

Aaron "A-Man" Wellons was an aspiring local rapper when his life was cut short in 2012, the result of medications he'd taken for a brain tumor he'd had since he was a child. Tonight, friends and artists gather at Mr. Small's Theatre to pay tribute to the young man, and raise funds and awareness to combat prescription-medicine addiction and abuse. Musicians taking part include The Get Down Gang, SOS, Jacquae Mae and many more; there'll also be comedians and a fashion show. AM 7 p.m. 400 Lincoln Ave., Millvale. $10-15. 18 and over. 412-821-4447 or www.mrsmalls.com

Last year, Girls Rock! Pittsburgh held its first music camps for girls, helping tween and teen girls learn to make music together. As the camp organizers gear up for year two, tonight they release a compilation of tracks from the first class of participants, with a listening party at Pittsburgh Filmmakers in Oakland. Along with the listening party, they'll be screening the film Girls Rock!, a 2008 documentary about the first such camp. Proceeds go toward next year's camp. AM 3 p.m. 477 Melwood Ave., North Oakland. $6. All ages. www.facebook.com/girlsrockpittsburgh

You might not expect to find a country quintet coming out of Brooklyn, but that's exactly where Punch Brothers is based — though its country and bluegrass sound is straight out of Nashville. The group is gearing up for a summer full of festival dates, but you can check out the band tonight at Mr. Small's Theatre along with special guest — and the most Irish name that you'll see in town on St. Patrick's Day — Aoife O'Donovan. Kayla Copes 8 p.m. 400 Lincoln Ave. Millvale. $27. All ages. 412-821-4447 or www.mrsmalls.com 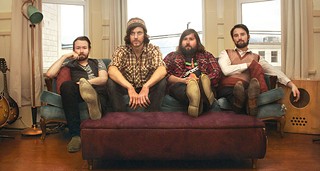 Bend Sinister has a lot of things coming up this year. Not only did it just release a new album, Animals, on March 11, but the band is also playing South by Southwest before its tour heads back north. The band's look and sound somewhat recall the rock of the '70s mixed with a more contemporary indie-rock vibe; check it out tonight at The Smiling Moose. KC 6:30 p.m. 1306 E. Carson St., South Side. $10. All ages. 412-431-4668 or www.smiling-moose.com