Shows by The Me Toos, Father John Misty, Hop Along, and the Leni Stern African Trio

Local rockers The Me Toos have a new collection of bluesy, country-tinged rock 'n' roll — which is entirely different from "rock" or "indie rock" — to share with their friends and fans tonight. The brand-new self-titled EP, which follows full-length album When Wilkes Met Barre and the All My Creatures EP, offers five tracks that mostly take it easy in the midtempo range (aside from the optimistic, garagey "Baby's Night Out"). It's a spirited nod to the heroes of classic-rock radio, with a lo-fi coating for modern listeners. The band takes Howlers tonight with Roulette Waves and The Neffs. Shawn Cooke 9 p.m. 4509 Liberty Ave., Bloomfield. $5. 412-682-0320 or howlerscoyotecafe.com 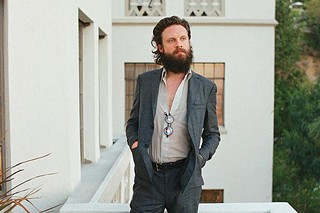 I understand why it's tough to love Father John Misty: He's totally irreverent, a little too sincere and might just be a complete caricature of the live-hard-die-fast '70s songwriters your parents idolized. Hell, they might like Misty (until they make out the "Mascara, blood, ash and cum" line on I Love You, Honeybear's opening track). You have to question the man's authenticity, but with love songs as tender and gorgeous as those on Honeybear — even if he's smothered them with sardonic ruminations — Misty (or, as his family presumably calls him, Josh Tillman) seems to be the real deal. He performs tonight at Carnegie of Homestead Music Hall with Mini Mansions. SC 8 p.m. 510 E. 10th Ave., Munhall. $25-35. 412-462-3444 or www.librarymusichall.com

Frances Quinlan's unbelievable switchblade of a voice is the first thing we hear on Painted Shut. At first, it's comparatively gentle and smooth — or shut, if you will. But throughout her band Hop Along's excellent second album, it pops open to slice up everything in sight. Some have compared Quinlan's early freak-folk music to Joanna Newsom, and it's easy to hear some of the harpist's trademark cracks and full-bodied growls in her music with Hop Along. Luckily, the Philadelphia-based Quinlan has a lockstep rock band to channel that vocal ruckus. Forget any hockey rivalries — we should be forever indebted to Philly for giving us some of the best recent indie-rock bands. Hop Along plays Cattivo tonight with Field Mouse and Skull Kid. SC 7 p.m. 146 44th St., Lawrenceville. $10-12. 412-687-2157 or www.cattivopgh.com

The too-broad term "world music" can be problematic for a number of reasons — mostly for functioning as an open-ended "other" category for music that doesn't originate in North America or, implicitly, in white culture. But Leni Stern, a white musician from Germany who came to study at Berklee College of Music and who finally landed in Mali, might earn the misleading genre tag more than most artists. With her 2007 LP Africa, Stern traded in her American-jazz chops for the traditional music of her new home, and she hasn't looked back since. For the current tour, stopping tonight at Club Café, Stern's road-testing some new Senegalese music with her trio comprised of Alioune Faye and Mamadou Ba. SC 8 p.m. 56 S. 12th St., South Side. $12-15. 412-431-4950 or clubcafelive.com