Tegan and Sara have that "chemistry" thing down. At age 15, the sisters Quin were already playing guitar and writing songs. Now, the indie pop/rock duo is playing festivals, headlining tours, and in the fall, will be opening for longtime supporter Katy Perry. The pair's popularity had been building for years, but Heartthrob, their latest album, broke them into the mainstream. Synth-heavy and '80s-esque, the album is a step away from their earlier guitar-driven material, but the term "selling out" is probably not applicable here. The band plays Stage AE tonight with My Midnight Heart and The Courtneys. Zach Brendza 7 p.m. 400 North Shore Drive, North Side. $35. All ages. 412-229-5483 www.stageae.com

Should we feel honored or a little scared? Those of us in our 30s now have multiple nostalgia package tours available each year. While one puts together party-rock bands with the likes of Sugar Ray and Smash Mouth, the Summerland Tour, which pulls through Stage AE tonight, is more the thinking man's '90s alt-rock nostalgia lineup. Founded by Art Alexakis, Summerland features his band Everclear, along with Soul Asylum, Eve 6 ("Inside Out"? OK, you'd know it if you heard it) and Spacehog. Extra bonus? You're unlikely to be approached by any under-agers trying to get you to buy them beer at tonight's outdoor show at Stage AE. Andy Mulkerin 6:30 p.m. 400 North Shore Drive, North Side. $25. All ages. 412-229-5483 or www.stageae.com 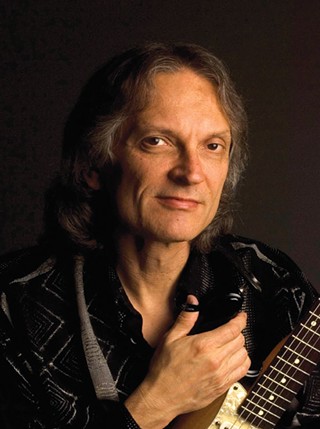 The 63-year-old Louisiana native Sonny Landreth is an authority on blues and slide guitar. The Americana Music Association named him Instrumentalist of the Year in 2005. Hell, he even has a slide-guitar instructional video. But these things would mean nothing if he couldn't still shred. And oh yes, he can. His last album, 2012's Elemental Journey, was an instrumental venture featuring Joe Satriani and Eric Johnson, and the licks and guitar work are still on point. After 11 studio albums, it seems that his playing will not falter. Landreth plays Hartwood Acres tonight with Kevin Garrett. ZB 7:30 p.m. 200 Hartwood Acres, Indiana Township. Free. All ages. 412-351-2528

Thrash-punk legends D.R.I. (Dirty Rotten Imbeciles) had to take some time off a few years back, when guitarist and cofounder Spike Cassidy was struck with colon cancer. Between 2006 and 2008, he made a full recovery, though, and the band returned to the road — where it's been at home for more than two decades. The cult favorite never reached the mainstream success of other thrash bands (like Metallica) or punk outfits (like Rancid) that were its contemporaries, but it was probably a favorite of the punkest kid you knew growing up. The band — both founders still included — plays the 31st Street Pub (the punkest bar you know) tonight. AM 9 p.m. 3101 Penn Ave., Strip District. $12-15. 412-391-8334 or www.31stpub.com