Local shows by Jack Wilson, MH the Verb and Jurassic 5, plus a new program from C Street Brass, a hits compilation from Anti-Flag, and the return of Mayhem Festival

Yes, the header says "chamber music," but this isn't just any old chamber music. C Street Brass, a CMU offshoot, has put together a program that melds all kinds of music — from classical to electronic. The all-brass ensemble is calling the program "No Limits," and performing it with DJ and producer Jakeisrain; the show is presented by Chamber Music Pittsburgh. Andy Mulkerin 7:30 p.m. Kelly-Strayhorn Theater, 5941 Penn Ave., East Liberty. $25-28. 412-363-3000 or www.kelly-strayhorn.org

Funny how Pittsburgh can bring people together, even when they're no longer in Pittsburgh: Take, for example, rappers Jack Wilson and MH the Verb. Wilson was an elder statesman of hip hop (and poetry) here for years; MH (Marcus Harris) came here for college and established himself coming up by performing at venues like Shadow Lounge. Now the two both live in New York City, and have collaborated on tracks. They're both back for a show at AVA with some other former ‘Burghers, Shelby Starr and host K.Renee. Also performing: Holly Keene, C.H.R.I.S., Kuf Knotz and Joint Effort. AM 9 p.m. 304 N. Craig St., Oakland. $5. avapgh.wordpress.com

The rebels in Anti-Flag have been upping the punks since 1993. In band years, that means the outfit should most likely have passed on to The Great Gig in the Sky. But instead, Pittsburgh's political-punk-rock godfathers released A Document of Dissent: 1993-2013 this week via the venerable Fat Wreck Chords. It's a 26-track collection of raging against the machine, sticking it to the man and calling out oppression in all forms. Punk isn't dead, and this release show is proof. The band plays the Rex Theater tonight with Brendan Kelly, Timeshares and World's Scariest Police Chases. Zach Brendza 7 p.m. 1602 E. Carson St., South Side. $15. All ages. 412-381-6811 or www.rextheater.com

From the creators of Warped Tour comes something completely different: Mayhem Festival. Just kidding — it's the same thing, but with metal bands, fewer acts and a slightly different stage configuration. This year's headliners include Avenged Sevenfold, Korn, Trivium and Asking Alexandria, which goes on around 6 p.m., when the rest of the tour's bands wind down to shift the focus to the main stage. The Pittsburgh stop will be held at First Niagara Pavilion. ZB 7 p.m. 665 Route 18, Burgettstown. $29.50-$89.50. All ages. 724-947-7400 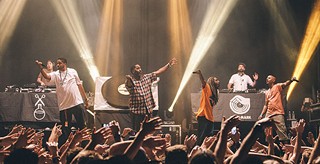 Since reuniting at Coachella in 2013, Jurassic 5 has played here and there, hitting festivals and touring overseas. Now, for the first time since 2006, the legendary hip-hop outfit is showing the United States some love. The group, which peaked in the early-to-mid '00s with two albums that hit No. 15 on the Billboard 200, plays Stage AE tonight with Dilated Peoples, Beat Junkies (Rhettmatic) and MC Supernatural. ZB 7 p.m. 400 North Shore Drive, North Side. $25. All ages. 412-229-5483 or www.stageae.com