New releases from locals Telavision and Donora, plus a tribute to Lead Belly, the Red Bull Thre3style DJ competition, and Pig Destroyer comes to Altar

For better or worse, concert-bookers work on a more advanced schedule than the NFL. Homegrown indie-poppers Donora were originally slated to play Brillobox on Jan. 3, but after the Steelers secured a first-round playoff game for that same night, the whole city canceled its plans. This Friday, the band will finally celebrate the release of its fourth LP, Ha Ha Heart. "Put on Your Neon" was just featured on ABC Family's Switched at Birth, but you can hear it on a much more intimate scale tonight, along with opening sets from Kahli Abdu & VHS Safari and The Nox Boys. Shawn Cooke 9 p.m. 4104 Penn Ave., Bloomfield. $5. 412-621-4900 or www.brillobox.net 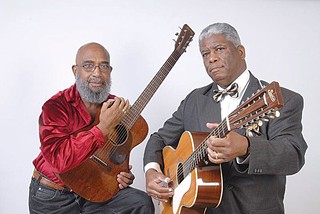 Few names are as revered in the blues world — or in American music period — as Lead Belly. The early-20th-century musician (born Huddie Ledbetter) was one of the pioneering voices in Delta blues, bridging the gap between Southern music (he grew up in Louisiana) and metropolitan folk (having moved to New York City later in life). Tonight, paying tribute to the legend at Carnegie Lecture Hall are: Josh White Jr. (whose father played with Lead Belly), Rev. Robert B. Jones Sr. and pianist Radoslav Lorković. It's presented by Calliope. Andy Mulkerin 7:30 p.m. 4400 Forbes Ave., Oakland. $39. All ages. 412-361-1915 or www.calliopehouse.org

The Red Bull Thre3style DJ battle has become an annual tradition in cities across the country. Tonight, it stops in Pittsburgh, where our local qualifying round takes place with contestants Petey C, Bamboo and Midas competing for a chance to move on to the U.S. final (and possible the world final). The eastern region only has events in Washington, D.C., Philadelphia and Pittsburgh, so it's no small deal — check out our local reps, plus DJ Bonics and Charlie White, tonight at the Rex Theater. AM 9 p.m. 1602 E. Carson St., South Side. Free (with RSVP at win.gs/3stylepgh). www.rebullthre3style.com

It's hard to believe that Pig Destroyer's latest EP, Mass and Volume, was really recorded during the Phantom Limb sessions — its 19-minute title track unfolds in a brutal, methodical dirge for the band's friend and Relapse Records staffer Pat Egan, who died in 2013. At the time, Pig Destroyer couldn't have anticipated the context of this release, but the EP's two songs are far more measured and somber than anything on Phantom Limb. Expect the band to mostly stick to its rapid-fire grindcore mode at Altar Bar, with Full of Hell, Cloud Rat and Purge set to open. SC 8 p.m. 1620 Penn Ave., Strip District. $18. 412-263-2877 or www.thealtarbar.com