Veteran soft pop-rocker Matthew Perryman Jones continues to draw in new fans with his own brand of soul-altering pop. The artist grew up in Georgia and moved to Nashville to pursue music full time in the late '90s. Although Perryman Jones has gained mainstream success in recent years with song placements on prime-time television shows including Private Practice, Grey's Anatomy and Pretty Little Liars, he's stayed true to his Southern roots, traces of which subtly accent his music. His most recent release, an EP titled The Distance Between, is no exception. Bethie Girmai 8 p.m. Club Café, 56-58 S. 12th St., South Side. $10 ($12 day of show). 412-431-4950 or clubcafelive.com

So, Clay Aiken is playing Pittsburgh this week, and some people are probably into that. That's cool. But if you're looking for the complete opposite, we suggest an evening of: thrash metal; horrifying creature costumes; offensive lyrics and acts; and getting sprayed with "fluids" -- in other words, GWAR. The self-proclaimed scumlords of the universe are still going strong after a quarter century, including members Flattus Maximus, Balsac the Jaws of Death, Beefcake the Mighty and Jizmak Da Gusha. But hey, according to GWAR mythology, intergalactic vocalist Oderus Urungus is 43 billion years old, so 25 years on this toilet earth ain't nothin'. Also on the bill when GWAR plays Mr. Small's Theatre are Mobile Deathcamp, Mensrea and Dethlehem. Aaron Jentzen 7 p.m. 400 Lincoln Ave., Millvale. $25. All ages. 412-821-4447 or www.mrsmalls.com

The Baltimore-via-North Carolina trio Future Islands plays synth pop for wallflowers: It's not supremely danceable, but has a certain muted energy, perfect for the head-bobbers in the crowd. Think of the band as a subdued cousin of Bear in Heaven, perhaps -- or a more stable strain of TV on the Radio. The band, which released In Evening Air last year on Thrill Jockey, plays Brillobox with opener Ed Schrader's Music Beat. Andy Mulkerin 9 p.m. 4104 Penn Ave., Bloomfield. $8. 412-621-4900 or www.brillobox.net 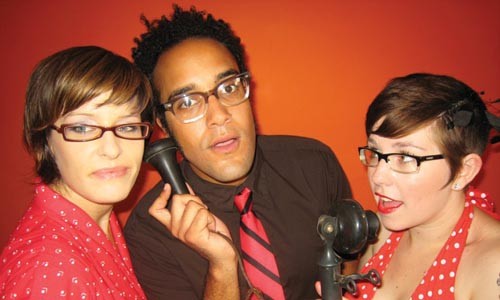 Yes, it's a cutesy Brooklyn folk trio, and yes, the members wear outfits that verge on steampunk. But take our word for it -- Pearl and the Beard is worth your time. The band's simple orchestrations, built around acoustic guitar and cello and flecked with percussion (but not a traditional drum kit), are straight gorgeous, as are the voices of all three members. The band will play Garfield Artworks with a local folky stalwart (Brad Yoder) and cello-rich outfit (Cello Fury). AM 8 p.m. 4131 Penn Ave., Garfield. $7. 412-361-2262 or www.garfieldartworks.com