Last week, the talk was all about Pharrell's hat; if Cris Cab gets lucky, some of that hat's luck will rub off on him. Or, more likely, some of Pharrell Williams' knack for success will filter through to Cab, who worked with Williams on a new single, "Liar Liar." Cab, a Miami-born pop-reggae singer, is poised for a breakthrough, with electronic-infused pop music and the support of the man with the Midas touch. Tonight at Stage AE, Cab opens for Rebelution; next time, he'll probably be the headliner. Andy Mulkerin 8 p.m. 400 North Shore Drive, North Side. $17.50-20. All ages. 412-229-5483 or www.stageae.com

You might be surprised to hear a bit of hip hop in the title track of Paradise Fears' 2013 EP Battle Scars — the six-piece is, after all, from South Dakota, and on the whole has more of a pop-and-rock sound. Tonight at Altar Bar, the band plays tunes from that record and more, acoustic and in the round. Sunderland opens. Kayla Copes 7 p.m. 1620 Penn Ave., Strip District. $25. All ages. 412-206-9719 or www.thealtarbar.com

On the surface, Julianna Barwick is in a league with the biggest of the ambient-beautiful outfits, like Sigur Rós (whose Alex Somers recorded Barwick's latest, Nepenthe). But one thing that makes her unique is that her soundscapes — wintry, gorgeous — are made largely with loops of her voice, rather than a full complement of instruments. Tonight, Barwick crosses the tundra of the North Side to play The Andy Warhol Museum; Vasillus opens. AM 8 p.m. 117 Sandusky St., North Side. $12-15. All ages. 412-237-8300 or www.warhol.org

G. Love & Special Sauce is back! The longtime Philadelphia alternative hip-hop band is going on tour to celebrate the 20-year anniversary of its first album. Recently, the outfit released a new single called "Nothing Quite Like Home," and a new album, Sugar, is due out April 22. Whether you're a G. Love fan from way back or just interested in catching up, you can find the band at Stage AE tonight. KC 8 p.m. 400 North Shore Drive, North Side. $20. All ages. 412-229-5483 or www.stageae.com 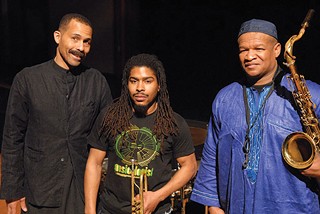 The realest jazz in town tonight will no doubt be at Thunderbird Café, where Chicago's Ethnic Heritage Ensemble — the progressive-jazz outfit that's been around for 40 years now — lays it down. The group, made up of Kahil El-Zabar, Ernest Dawkins and Corey Wilkes, has been at it off and on since the '70s, and each member has compiled his own résumé of session and touring work. AM 6 p.m. 4023 Butler St., Lawrenceville. $16-20. 412-682-0177 or www.thunderbirdcafe.net