Local shows by Yelawolf and Geoff Farina's Exit Verse, plus holiday benefit performances presented by WYEP and the Blues Society

By Andy Mulkerin and Samantha Ward

It's a holiday tradition that's grown over time — and supports a good cause. The annual WYEP Holiday Hootenanny and Pajama Jam returns to Stage AE for tonight's show, featuring local talent doing classic and offbeat holiday tunes. Curated this year by man-about-town Nathan Zoob (of Wreck Loose) and his all-star house band, the show promises names like Billy Price, Joy Ike and Kai Roberts; a pajama drive (new kids' pajamas and books accepted at the door) benefits local kids' charities. Those with little ones show up early for the 7 p.m. family set with Josh & Gab; the Hoot itself, broadcast live on WYEP, begins at 8 p.m.. Andy Mulkerin 6:30 p.m. 400 North Shore Drive, North Side. $15-20, kids under 12 free. 412-381-9131 or www.wyep.org

Ex-Karate singer/guitarist Geoff Farina got together with drummer John Dugan and bassist Pete Croke to form Exit Verse in early 2013; he had broken up his early emo-indie group Karate in 2005 after the years of loud performances began causing him serious hearing damage. During his rock hiatus, Farina focused on playing more acoustic music. Now, the formation of Exit Verse marks his arrival back into a louder sound. Let's hope his hearing holds up. Exit Verse will stop in at Club Café tonight to promote its self-titled debut. Samantha Ward 7 p.m. 56 S. 12th St., South Side. $8. 412-431-4950 or www.clubcafelive.com 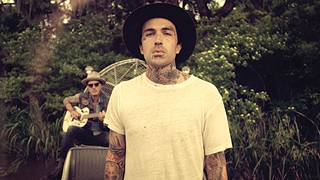 Michael Wayne Atha, a.k.a. Yelawolf, comes from the small town of Gadsden, Ala. After a somewhat nomadic childhood with his mother (whom he's described in interviews as "wild" and "rock and roll"), Yelawolf made a name for himself as an underground rapper via Myspace and mixtapes. In 2011 he signed with Eminem's Shady label, and a year later paired with Blink-182 drummer Travis Barker for his EP Psycho White.  Yelawolf challenges himself to blend musical influences that normally wouldn't integrate with his unique style of hip hop. You can see him tonight with Rittz, Big Henry and DJ Klever at Altar Bar. SW 8 p.m. 1620 Penn Ave., Strip District. $20. All ages. 412-206-9719 or www.thealtarbar.com

While having a kind of shitty Christmas could be grounds for writing a few good blues tunes, nobody wishes that upon a kid — the blues can wait a few years. That's why the Blues Society of Western Pennsylvania put together today's Blues for Toys Christmas Party at Moondog's, to benefit Toys for Tots: to help ensure that kids who might not otherwise get gifts this holiday season will be taken care of. Donations of new toys will be accepted for Toys for Tots, and The Nighthawks and Eugene and the Nightcrawlers will be playing. AM 4 p.m. 378 Freeport Road, Blawnox. $8-10. 412-828-2040 or www.moondogs.us