Local shows Pat Metheny, Trombone Shorty, Sharon Jones and the Dap Kings, and Band of Skulls, plus a reunion for Once Nothing, and the departure of Mary Mack

Pat Metheny is arguably our best-known (and best-coiffed) contemporary jazz guitarist. He started early, playing with Jaco Pastorius; for years, he's led the Pat Metheny Group, and more recently he fronted an orchestra that was a bunch of robots. This summer, he's touring with the Pat Metheny Unity Band, a quartet with PMG drummer Antonio Sanchez along with bassist Ben Williams and saxophonist Chris Potter. (No, not that Chris Potter.) The band plays one show only, presented by MCG Jazz, tonight on the lawn at Robert Morris University. Editor's note: On Wed., Aug. 8, MCG Jazz announced that this concert will take place inside the Sewall Center, not outside on the lawn as originally planned. Andy Mulkerin 7:30 p.m. 6001 University Blvd., Moon. $10-40. All ages. 412-322-0800 or www.mcgjazz.org 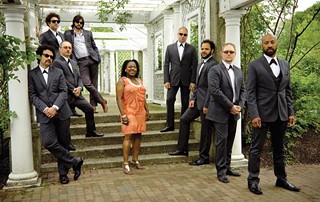 Self-described "blue-collar metal" pioneers Once Nothing covered a lot of ground during the band's nine-year existence. The Pittsburgh-based five-piece released albums on Solid State Records and CI Records and embarked on multiple tours that hit every state within the continental United States before breaking up in 2009. The members have decided to hold another reunion show, following an initial run of 2010 performances: Once Nothing returns to the stage at Altar Bar tonight with Endeavor, Slaves BC, Until We Have Faces and Forever in Fear. GH 7 p.m. 1620 Penn Ave., Strip District. $12-14. 412-206-9719 or www.thealtarbar.com

For over a decade, Mary Mack has been making her mark on the city's art and music communities, as a printmaker, educator and DJ. But, like all good things, she's now heading to Canada — and tonight's Operation Sappho dance party at Brillobox marks her departure. She's been a major part of the monthly LGBT-friendly event since it began six years ago; send her off in style with lots of Canada-themed ridiculousness. AM 10 p.m. 4104 Penn Ave., Bloomfield. $6. 412-621-4900 or www.brillobox.net