She tries to say goodbye and she chokes. She tries to walk away and she stumbles. She may try, but Macy Gray can't stay away. If you haven't been keeping up, the singer and songwriter has in fact released music after her debut album On How Life Is, which featured the song "I Try," her claim to fame. There have been six albums, actually, with a seventh on the way in October. Spoiler alert: "Bang Bang," the first single off her new album The Way, is really good. Gray performs tonight at Hartwood Acres. Zach Brendza 7:30 p.m. Middle Road, Hampton. Free. All ages. 412-351-2528

Since meeting in the late '60s, Steely Dan's Walter Becker and Donald Fagen — who bring their absurdly named Jamalot Ever After tour to the Benedum Center tonight — have produced records that are easy to listen to, but somewhat hard to fathom. Maybe their commercially successful jazz-rock was a Trojan horse for some of the darkest, sleaziest lyrics ever written but, more likely, these nerdy jazz fanatics (whom Jay Black of Jay and the Americans dubbed "the Manson and Starkweather of rock 'n' roll") just happened to have a pretty good handle on the American psyche. Margaret Welsh 8 p.m. 803 Liberty Ave., Downtown. Sold out as of press time. 412-456-6666 or www.trustarts.org 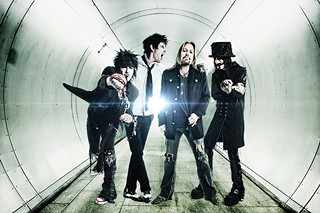 School's out for summer. School's out for ... Dr. Feelgood? They say this is the end of Tommy Lee, Nikki Sixx and company playing together as Mötley Crüe — and there is a contract to prove it. The band claims to be the "first ever" to sign a "Cessation of Touring" agreement, which is cool, right? Eh, not necessarily. But, if you ever wanted to hear "Kickstart My Heart" or "Shout at the Devil" live, this is reputedly your last chance — plus, plenty of pyrotechnics are promised. The Crüe plays tonight with Alice Cooper at First Niagara Pavilion. ZB 7 p.m. 665 Route 18, Burgettstown. $31-131. All ages. 724-947-7400

Coming to a DIY venue near you this summer, the state of Michigan presents: The Reptillian, a three-piece mathy screamo/post-punk band. Hailing from Kalamazoo, The Reptillian is signed to Count Your Lucky Stars, a Michigan indie label that has offered releases from Penfold, Into It. Over It. and Moving Mountains. Check out the band's latest album, Low Health: If you go to house shows and like yelling, it's for you. The band plays tonight with Two Knight, Tare, Us, Homies and Small Fish Great Lake at The Mr. Roboto Project. ZB 7 p.m. 5106 Penn Ave., Bloomfield. $5. All ages. www.therobotoproject.org