Local shows by Okkervil River, Winterpills, Das Racist, and Jello Biafra and the Guantanamo School of Medicine — plus, Bear Cub returns to town to release a new album 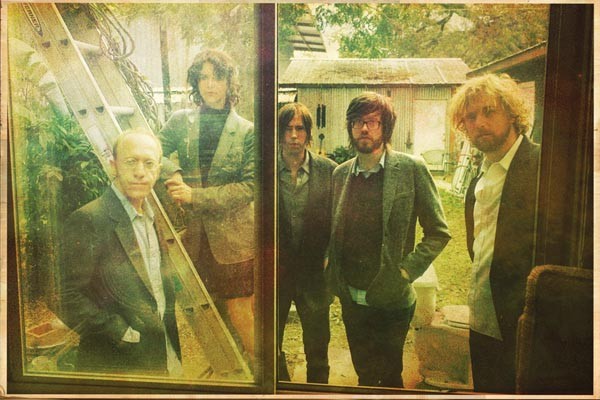 At this point, it's fair to think of Okkervil River as an Austin juggernaut. The folk-informed, laid-back rock band, headed up by Will Sheff, had back-to-back smash albums with the critically -acclaimed Black Sheep Boy and The Stage Names in the mid-'00s, spun off the band Shearwater, and backed the legendary Austinite Roky Erickson on his 2010 comeback album. Sheff and company play Mr. Small's tonight with support from The Mynabirds. Andy Mulkerin 8 p.m. Mr. Small's Theatre, 400 Lincoln Ave., Millvale. $16-18. All ages. 412-821-4447 or www.mrsmalls.com

If pretty is your thing, Winterpills is your band: The Massachusetts-based outfit, which came together in 2005, doesn't overwhelm, but it lays it on in terms of beauty. Soft guitars, vocal harmonies, some strings here and there — the band's latest, All My Lovely Goners, is nothing if not a pleasant listen. Perfect for a late-summer evening, which is appropriate, because Winterpills play outside at Schenley Plaza tonight, part of WYEP's Final Fridays series. AM 7 p.m. 4100 Forbes Ave., Oakland. Free. All ages. 412-381-9131 or www.wyep.org

While Bear Cub is based in Nashville now, we still claim the band — with its Pittsburgh roots — as our own. (So much so that it was a finalist in the Iron City Sound contest sponsored by Pittsburgh Brewing earlier this year.) The Americana-y indie band headed up by Jesse Hall is back in town tonight to release its latest, Good Morning, Every Morning. Opening the night at the Rex Theater are locals New Shouts and Gypsy and His Band of Ghosts. AM 9 p.m. Rex Theater, 1602 E. Carson St., South Side. $15. All ages. 412-381-6811 or www.rextheater.com

Das Racist is the hipster grad student of hip hop: equal parts silly and erudite, ironic and forward-thinking, the trio emerged with a hit about a combination Pizza Hut and Taco Bell and has since released three albums (Shut Up, Dude; Sit Down; and Relax). The members have solo projects, but also side acts that include writing serious cultural commentary, and even community organizing. (Himanshu Suri, known in the group as Heems, is on the board of an organization working with immigrant populations in Queens.) Tonight, the group brings serious fun to 6119. AM 9 p.m. 6119 Penn Ave., East Liberty. $10. www.facebook.com/6119Penn

If there's one punk who never goes off message, it's Jello Biafra. The onetime Dead Kennedys frontman and head of Alternative Tentacles Records is a go-to favorite for baldly political, often satirical music with crunchy, persistent guitars. His current band, Jello Biafra and the Guantanamo School of Medicine, released its first full-length, Audacity of Hype, in 2009, and plans a 2013 release tentatively called White People and the Damage Done. The band makes its first stop in Pittsburgh tonight, at Altar Bar. AM 7 p.m. 1620 Penn Ave., Strip District. $15-17. All ages. 412-206-9719 or www.thealtarbar.com