Gender- and genre-blending antihero Genesis Breyer P-Orridge gets PTV3 — the reunited, updated iteration of '80s "hyperdelic" band Psychic TV — together tonight for an amalgamation of provocative, psychedelic, industrial and experimental sounds that add up to nothing less than a night of dancing. Presented by The Andy Warhol Museum, which is also curating the performance artist's exhibit S/HE IS HER/E, PTV3 will appear in a rare performance at the New Hazlett Theater. Kira Scammell 8 p.m. 6 Allegheny Square East, North Side. $20-25. All ages. 412-320-4610 or www.newhazletttheater.org

The story goes that back in the '50s, teenage doo-wop groups used to hang out on street corners, singing for whomever passed by — and sometimes, when they were lucky, someone from a record label might pass by. Anymore, YouTube is the street corner, the spot where teens test their talents and hope someone important will click through. It worked for Megan and Liz, fraternal twin sisters from Michigan who started posting homemade music videos, beginning when they were just 15, that went viral a few years later. They're grown-up now — 20, in fact — and coming through town with their sugary teen-pleasing tunes. YouTube boy duo Kalin and Myles open. Andy Mulkerin 7:30 p.m. Altar Bar, 1620 Penn Ave., Strip District. $15-40. All ages. 412-206-9719 or www.thealtarbar.com

Seth Faergolzia takes the eclectic genre of freak folk up a notch with his music project 23 Psaegz. Much like his first 13-year project, Dufus, 23 Psaegz (pronounced like "sages") features a rotating crew of musicians that create tunes somewhere between haphazard and harmonious. With up to 18 musicians onstage at once, and instruments ranging from tuba to glockenspiel and keytar, 23 Psaegz is a unique show each and every performance. Check it out for yourself tonight at Howlers. KS 8 p.m. 4509 Liberty Ave., Bloomfield. $5. 412-682-0320 or www.howlerscoyotecafe.com 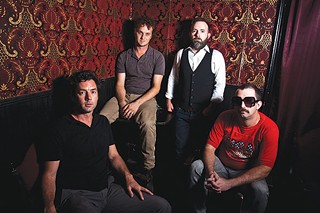 Pittsburgh has a long history of jazz, for sure, but not necessarily this kind of jazz: Last month saw the debut of the new Frenchmen on Penn series, featuring New Orleans musicians playing at the Pittsburgh Winery. The series was begun by Pittsburghers Tim and Debby Wolfson after they developed connections with Louisiana musicians through travel in that region; tonight, it continues with Lost Bayou Ramblers, a Grammy-nominated Cajun band that's as much rock as it is traditional New Orleans music. AM 7 p.m. 2815 Penn Ave., Strip District. $15. www.pittsburghwinery.com