Performances by Dick Dale, I Disappear, Bayside and the Melvins, plus the annual Monroeville Jazz Festival

[JAZZ] + SAT., AUG. 20
Summer may be exemplified best by the sounds of jazz floating through the evening air on a warm night. The Monroeville Jazz Festival will take place at Tall Trees Amphitheater in Monroeville Community Park West, a perfect place to spread a blanket and enjoy featured performers Chelsea Baratz and Adam James. James is a Canadian performer and entertainer with a background in theater. Baratz, a native of Upper St. Clair, is a bandleader, composer and saxophonist now living in NYC and splitting her time between gigging and recording as a session musician. Food and beverage vendors will be on-site. Meg Fair 6 p.m. 2399 Tilbrook Road, Monroeville. Free. All ages. 412-317-4322 or www.monroevillejazz.org

[HEAVY] + SUN., AUG. 21
Some of the East Coast’s finest heavy bands are turning The Mr. Roboto Project into a hardcore haven with New York’s I Disappear, a group that fuses melodic, smart riffs with aggressive breakdowns. If you love Metallica, you’re going to go wild over Near Death, a band of metalheads who make music that is circle-pit- and two-step-ready. TOS brings the brutal prog-core, while Boston-based Vein will melt faces and blow minds with its weirdo experimental hardcore. Try not to throw elbows during Vein’s set, I dare ya. New Pgh HxC band Iron Jungle debuts at the gig. Limber up. MF 7 p.m. 5106 Penn Ave., Bloomfield. $10. All ages. www.robotoproject.org

Photo courtesy of Megan Thompson
Bayside
[POP PUNK] + TUES., AUG. 23
Emo-meets-punk pros Bayside will grace Spirit on a stacked bill of what’s good in punk in 2016. Blessed were the early 2000s, thanks to Bayside vocalist Anthony Ranieri’s delightful grit and ear for melody. That band’s sound would go on to influence a great deal of current pop punk and emo, and the Baysides’ recent, fresh-faced singles surely mean a new album is on the way for old fans. Joining the lineup are The Menzingers, earworm wizards and tenured punk vets. Fresh blood rounds out the show with Sorority Noise, a bouncy emo band worth investing in. MF 8 p.m. 242 51st St., Lawrenceville. $20-24. All ages. 412-586-4441 or www.spiritpgh.com 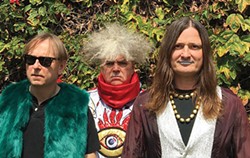 Photo courtesy of Mackie Osborne
The Melvins
[SLUDGE] + TUES., AUG 23
The Melvins have always existed, and they always will. (At least that’s how it seems.) For real, it’s hard to overstate the influence these self-deprecating elder statesmen of rock have had on heavy music — from doom to experimental to hardcore to drone, there’s nary a sub-genre King Buzzo and Dale Crover haven’t helped shape. If this year’s release, Basses Loaded, is any indication, you can expect rib-thumping riffs and sick noisy harmonies tonight at the Rex Theatre. Helms Alee opens. Margaret Welsh 8 p.m. Tue., Aug. 23. 1602 E. Carson St., South Side. $23-25. All ages. 412-381-6811 or www.rextheater.com