Local shows by KRS-One, The Julie Ruin, Sharon Jones and the Dap-Kings, Dan Croll and The Tillers

There are few rappers more legendary than KRS-One: The Bronx native cofounded Boogie Down Productions in the '80s, arguably setting the stage for the rise of gangsta rap, then quickly moved from violent imagery to socially conscious and politically radical lyrics. He's uncompromising on everything from race relations to vegetarianism, and never shies away from controversy; KRS-One plays Mr. Small's Theatre tonight in a show presented by 1Hood and 720 Music. Jasiri X and Smilo open. Andy Mulkerin 8 p.m. 400 Lincoln Ave., Millvale. $25. 18 and over. 412-821-4447 or www.mrsmalls.com 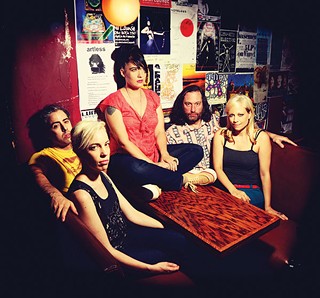 Kathleen Hanna is well known in feminist circles; the original Riot Grrrl's life was chronicled in last year's documentary The Punk Singer. Hanna grew to fame with Bikini Kill, and her current primary vehicle, The Julie Ruin, has a similar punk-rock vibe; these songs pack a punch. Take the lyrics from the band's single "Ha Ha Ha": "You're a roadblock, dressed like a solution / an ambush with no ammunition." Not all of the band's songs are like that, though; "Just My Kind" is a love song with a '50s vibe. If punk rock is your thing, check out tonight's show at Mr. Small's Theatre with special guests Screaming Females. Kayla Copes 8 p.m. 400 Lincoln Ave., Millvale. $15. All ages. 412-821-4447 or www.mrsmalls.com

Last year, things didn't look great for soul phenom Sharon Jones: In the summer, the 57-year-old, who reached fame well into her 40s after years working jobs like corrections officer, was undergoing treatment for pancreatic cancer. By November, though, the energetic performer was back onstage; Sharon Jones and the Dap-Kings released their sixth full-length in January of this year, and tonight they play the Byham Theater in a show that celebrates the 40th anniversary of local public radio station WYEP-FM. AM 8 p.m. 101 Sixth St., Downtown. $32.25-42.25. All ages. 412-456-6666 or www.trustarts.org

British singer-songwriter Dan Croll just released his debut album, Sweet Disarray, and now he's making his way stateside for a headlining tour. Croll went to the Liverpool Institute of Performing Arts, where he had a chance to study directly with LIPA founder Paul McCartney. Croll recently performed on Jimmy Kimmel Live, and has previously toured with Bastille and Imagine Dragons. Check him out tonight at Club Café with special guests Panama Wedding. KC 8 p.m. 56 S. 12th St., South Side. $12. 412-431-4950 or www.clubcafelive.com

The Tillers have been through Pittsburgh before — including on a tour with Pokey LaFarge last year — but the Cincinnati three-piece's show tonight is at Howlers in Bloomfield, an intimate and fitting venue for the old-timey string band. They're on their way to the Brooklyn Folk Festival and hitting a number of mid-Atlantic towns on the way; we're lucky to get them on a Wednesday night with Vermont's Waylon Speed and local notable Jayke Orvis. AM 8 p.m. 4509 Liberty Ave., Bloomfield. $5. 412-682-0320 or www.howlerscoyotecafe.com