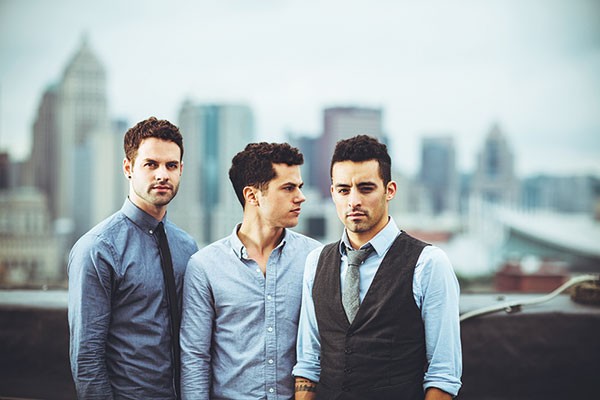 When Dinner and a Suit formed in 2008, it was a pop-punk outfit from Moorestown, N.J., with little buzz around it. In the ensuing years, though, the band quickly worked its way up the ladder, making the finals of the Ernie Ball battle of the bands, and playing Warped Tour. Since then, the three full-time members have put out two albums and become MTV darlings in the process. Energetic keyboard work is what really drives the catchier tracks, and on the whole, the band is able to capture a surprising amount of emotion. With The Parlotones and These Three Words at Altar Bar. John Lavanga 7 p.m. 1620 Penn Ave., Strip District. $12-$14. 412-206-9719 or www.thealtarbar.com

Originally hailing from New Orleans, indie-rock duo Generationals are so named, they say, because of their penchant for watching CNN — where everything is built up to be a generational issue — while recording debut album Con Law during the 2008 election. The album, which was a distinctly palatable mishmash of everything from British Invasion to doo-wop to a modern and sunny indie-rock vibe, was well received, and followed up with the 2011 release Actor-Caster, which brought on even softer, sweeter experimentation from the duo. The latest is Heza, just released, and Generationals play Club Café tonight with Splaash. JL 10 p.m. 56 S. 12th St., South Side. $10. 412-431-4950 or www.clubcafelive.com

There are two especially notable things about Bettye Lavette: that remarkable voice and that life story. Lavette started as a singer when she was a teen-ager in the early '60s, but didn't find broad success until the mid-'00s — the kind of delayed-success story that keeps those of us who aren't 19 anymore dreaming. Now in her late 60s, the crooner has recorded three full-lengths and an EP for Anti- (the imprint that also reps Tom Waits), and tours relentlessly — appearing tonight at the Cabaret at Theater Square, as part of the JazzLive series. Andy Mulkerin 8 p.m. 655 Penn Ave., Downtown. $30.75. 412-456-6666 or www.trustarts.org

As a painter, Chicago's Gregory Jacobsen is known for his representations of the grotesque and the gross-out: bodily functions, weird organ-meat stuff, things that make most of us squirm. His music — in the form of Lovely Little Girls, playing tonight at Howlers — is much the same. While most "scary" and "threatening" rock music is played-out at this point, Jacobsen's disturbing poetry, accompanied by free-jazz and no-wave backing music, is both absurd and discomfiting (as is his weird, half-clown-like makeup). Tonight's show also features a rare performance by disbanded locals Brown Angel; Bloated Sluts, Hunted Creatures and Night Vapor fill out the bill. AM 9 p.m. 4509 Liberty Ave., Bloomfield. $6. 412-682-0320 or www.howlerscoyotecafe.com