Tonight, The Shop hosts a bonkers, experimental bill: noise rockers Linear Downfall headline a disparate collection of bands. The Nashville quartet plans to release its new album, Sufferland, later this month with an accompanying film that the band funded on Indiegogo. Hitting some of the same adventurous beats as Linear Downfall's music, Sufferland (the movie) follows the "compartmentalized landscapes in the mind of a tormented girl who is under the control of a tormented man." Michigan's Anybody But the Cops and locals Cruces, Microwaves and Joey Molinaro (with Buenos Aires performer Arias Luciana and the Cosmic Principle) also appear. Shawn Cooke 8 p.m. 4314 Main St., Bloomfield. $5-10. 412-951-0622 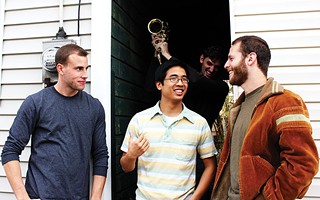 Local jazz troupe Stranger Convention will be hanging it up for the foreseeable future — but it has to release a new album first. The group, which describes itself as a lovechild of The Bad Plus and Radiohead that learned how to play modern jazz, will release its new record tonight at Thunderbird Café before keyboardist Pulsar Li heads to Atlanta for an anesthesiology fellowship at Emory. Two other jazz crossover acts, Kinetic and Eastend Mile, fill out the lineup. SC 9 p.m. 4023 Butler St., Lawrenceville. $7. 412-682-0177 or www.thunderbirdcafe.net

Alejandro Rose Garcia's latest album as Shakey Graves was a coalescence of everything that everyone seems to like lately — the blues, folky foot-stompers and some quiet songwriter fare. And the War Came is equal parts Mumford, Edward Sharpe and Gary Clarke Jr., but it feels a bit more raucous and less calculated than some of their recent efforts. Garcia's sold-out show tonight at Mr. Small's represents a near-miss of a duet opportunity with Esme Patterson, who guests on "Dearly Departed" and performed at Brillobox just three days prior. David Ramirez, however, will be there. SC 9 p.m. 400 Lincoln Ave., Millvale. 412-821-4447 or www.mrsmalls.com

Kid Ink isn't shy about his love for cars — we're talking about a guy who named his first two major-label LPs My Own Lane and Full Speed. This year, he graduated to the big leagues — the holy grail of car-loving rappers. His song "Ride Out" was featured on the soundtrack for the year's best bromance, Furious 7. It's a loaded posse cut that feels like the Avengers for B-list rappers, with Tyga, YG, Wale and Rich Homie Quan, and with Kid Ink taking the wheel on its hook. His brand of rap-singing has grown increasingly popular over the past few years, and he's getting closer to Wiz levels of ubiquity. SC 7 p.m. 1620 Smallman St., Strip District. $20-28. 412-720-1396 or www.xtazapgh.com