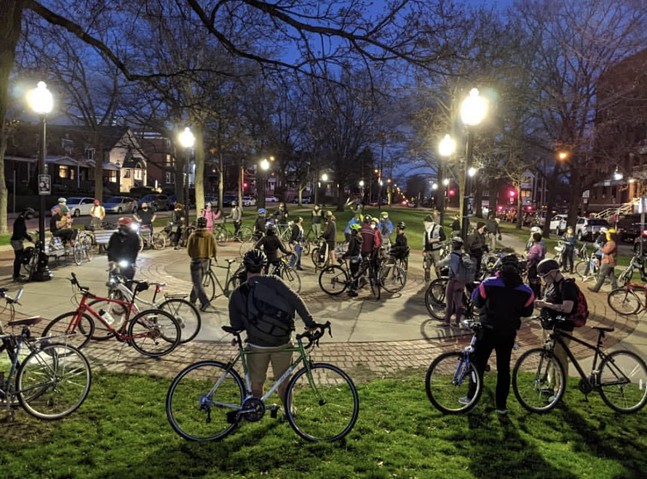 Photo courtesy Pittsburgh Critical Mass
Critical Mass riders meeting in Bloomfield in March
Riding a bike on Pittsburgh city streets is daunting. The hills are constant, but it’s the constant confrontations with drivers that really add to the stress level. And when riding alone, a cyclist can feel totally outnumbered.

But a bicycle-advocacy movement has sought to address that discrepancy for years, and that movement is seeing a rebound in the Steel City.

Critical Mass is when a group of people all meet at the same location, and then travel a route all together on bikes. The movement started in San Francisco in the 1990s, and the practice has been replicated in cities across the globe. The direct action had some iterations in Pittsburgh over the last couple decades, including some conflicts with the police in 2006. More recently, it has since made a comeback starting in September 2020.

Pittsburgh City Paper corresponded with one of Pittsburgh’s Critical Mass organizers Peter, who asked that their full name be withheld out of fear of retribution because the group’s rides are organic and don’t receive city permits.

Peter says the ride is about “forming a big enough group — a 'critical mass' of riders — [so] we can prevent cars from passing through and create a safe space to bike. These rides in Pittsburgh usually feature music, bike decorations, and colorful costumes.

“Our rides demonstrate the power of solidarity. By joining together in one big group we create a sense of safety and belonging,” says Peter. “There are many cyclists in Pittsburgh who want to ride in the street but don’t feel safe doing it alone. At our rides anyone can feel comfortable riding in the street, regardless of skill level. We intentionally ride slowly, keep our routes flat, and encourage everyone participating to have a say in how we approach the ride.”


Ever wondered what a critical mass looks like? Check out this clip from our last ride in April! Hope to see you Friday! Rain or Shine! pic.twitter.com/H360HhGJUT

Bike commuting in Pittsburgh has increased over the years, but still remains small. In 2010, bike commuters made up about 1% of city residents, and in 2019, they made up about 2%. Bike advocates have said more bike infrastructure, particularly protected bike lanes, should lead to more people riding in the streets. An oft-used study out of Portland, Oregon, showed that 60% of Portlanders were interested in biking as a mode of transportation, but didn’t regularly because they were concerned about safety.

Peter agrees there are many improvements to be made in Pittsburgh to better accommodate cyclists, but says Critical Mass isn’t about making any demands.

“Instead of asking others to do something, our solution is to take action ourselves and collectively create a safe and relaxed environment for cycling at each of our rides,” says Peter.

They add that Critical Mass is inclusive to whoever wants to join and whatever they want to take away from the rides. Peter says some use the ride to protest car dominance and lack of bike infrastructure, while others use it as a way to disrupt public space and reclaim it.

“Our rides are also about sharing joy together as a community, and as anyone who’s seen Critical Mass pass by can tell you, we have a lot of fun!” says Peter. “It's important to us that everyone who rides with us feels welcome and enjoys the experience.”

Pittsburgh’s Critical Mass meets at Friendship Park in Bloomfield on the last Friday of every month at 6 p.m. The next Critical Mass will meet on June 25.