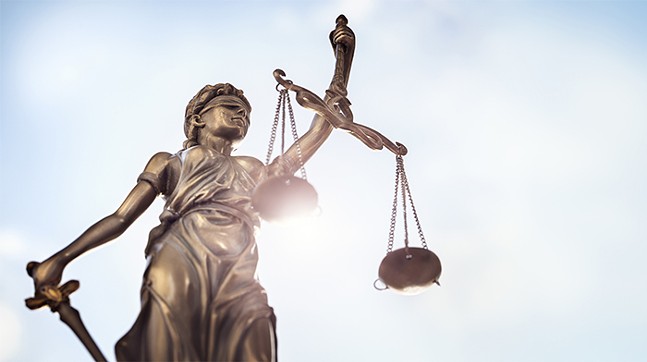 There are more than 30 candidates running to serve as judges on the Allegheny County Court of Common Pleas. This level of court is where many people accused of crimes see trials and face sentencing in the county. Because of that, its importance in Pennsylvania’s criminal justice movement is paramount.

Pittsburgh-area advocacy and political groups that are calling on criminal justice reforms understand this, and earlier this month, a coalition of like-minded groups threw their support behind a “slate of eight” judicial candidates for the Court of Common Pleas.

The coalition consists of the police-reform group Alliance for Police Accountability, Black-led political group 1Hood Power, statewide prison abolition group Straight Ahead, and UNITE PAC, a political action committee that works to get progressive candidates elected in the Pittsburgh area. The groups are joining forces this election cycle to create progressive political infrastructure.

Miracle Jones of 1Hood Power says in a press release that with nine seats open on Allegheny County’s Court of Common Pleas, and a slate of eight candidates that have demonstrated commitment to equitable justice, this year’s judicial elections can make a significant difference reforming the county’s court.

“Through electing these candidates, we can bring about tangible, transformative change in areas ranging across the drastic reduction of the use of cash bail, the increased usage of diversionary programs and alternatives to carceral punishment, and other judicial mechanisms that can combat mass incarceration and begin to eliminate racial and other demographic disparities in the system,” says Jones.

Among those who received endorsements were the three members of the Judicial Reform Coalition, three of the candidates — Henry-Taylor, Middleman, and Pappas — are already supporting each other as they campaign on similar platforms with the hopes of making lasting progressive reforms.

State Rep. Summer Lee (D-Swissvale) started UNITE PAC in 2019 and she believes if these eight candidates are elected, it can help “reshape this unjust system with judges who share our values.”

The Alliance for Police Accountability recently gathered more than 67,000 signatures for potential ballot initiatives to limit solitary confinement at the Allegheny County Jail and banning no-knock warrants by Pittsburgh Police.

However, with so many candidates seeking seats on Common Pleas court, one obstacle to successful campaigns could be position on the ballot. Studies show that position high up on the ballot, especially in such a large field, can have more significant effects on the race than party endorsements, recommendations from the Bar Association, or media attention.

Even so, Brandi Fisher of APA is confident that the coalition can have an effect on judicial races. She says with such low turnout in municipal elections (in Allegheny County odd year primaries, turnout is usually under 20%), the coalition’s efforts can make a difference.

“Through engaging people who typically do not participate in judicial elections, we will transform the electorate and the dynamics of this race,” says Fisher.

Canvassing for the slate of eight judicial candidates began this past weekend on March 27. The municipal primary elections will take place on May 18.
News Editor Ryan Deto contributed to this report.