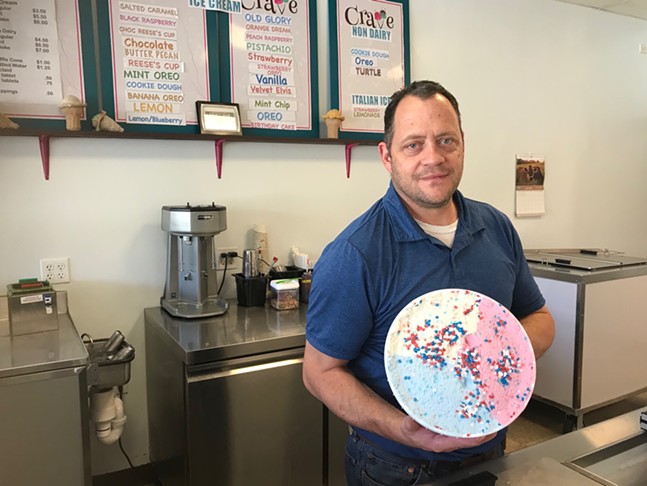 CP photo: Ryan Deto
Andy Gauvain at Crave Frozen Desserts
Dravosburg in the Mon Valley might not be high up on the list of culinary destinations in the Pittsburgh region, but a new ice cream shop provides some really delicious and interesting flavors of frozen treats.

Crave Frozen Desserts is located in a small strip mall next to the offices of state legislator and a copy store. It's so inconspicuous that owner Andrew Gauvain says some local Dravosburg residents still haven’t figured out the ice cream shop is there, even though it’s been open since February.

But don’t let its unpretentious digs fool you, it has some high-quality and culinary-inspired ice cream. Exploratory flavors at Crave have included orange-cardamom, chocolate-merlot, and watermelon-jalapeno.

“I have always wanted to do an ice cream shop,” said Gauvin during a recent visit to the shop. “I thought, ‘I went to culinary school. I can follow a recipe. I got a batch freezer.’”

So, Gauvin found a dairy and flavor supplier and he started mixing his own dairy (and non-dairy) delights. He uses 14% butterfat for his dairy ice cream, which he says is mid-range on the fat content scale, but allows for his flavors to really shine through. They also have a few rotating flavors of Italian ice.

“Nobody leaves here saying that was the best fat content ice cream I have ever had. But they will taste the flavor,” said Gauvin.

When I visited, I tried the Oreo-banana, which was a pale yellow with large chunks of chocolate-sandwich cookies stuffed into a banana base. There were also chunks of real banana throughout the scoop. It was rich, but refreshing.

Gauvin is also a veteran, and he dedicated a special ice cream called Old Glory, that is red, white, and blue, and mixes vanilla, strawberry and lemon-blueberry. Sometimes the shop also makes an ice cream called Stained Glass, that is flavored like the leftover milk from a bowl of Fruit Loops, and has gummies mixed in. Check Crave’s Facebook page for up-to-date flavors.

Crave is also licensed to supply ice cream to local restaurants, and Gauvin says that is where he hopes flavors will really get interesting.

“I have a desire to do some craft things that maybe you can't find if you are a restaurant.” said Gauvin. “I have a wholesale license, if there is a craft thing you want, like a maple-bourbon flavor, with real bourbon, we can do it.” 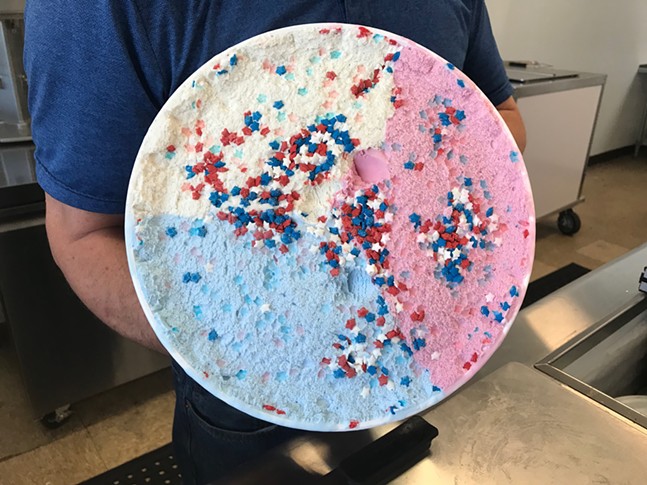 CP photo: Ryan Deto
Old Glory red, white, and blue ice cream
For patrons visiting the Crave storefront, Gauvin said it will pay off to try something that you haven’t had before.

“Come out and give us a shot, don’t limit yourself to the classics, like the vanilla or chocolate,” he said. “Be a little adventurous. Don't be afraid to try something a little different.”