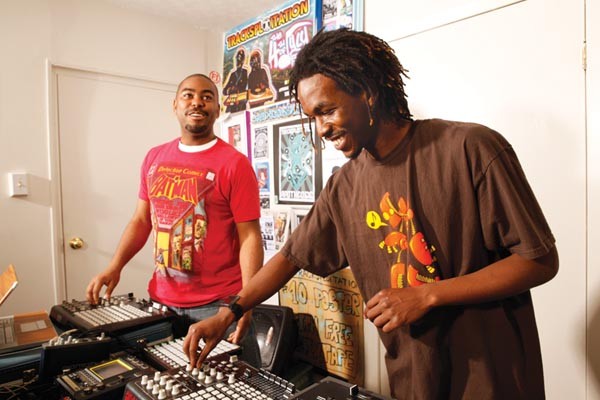 Photo by Heather Mull
Tracksploitation arrives to save Sounding Board.

In March, City Paper kicked off our new quarterly live-concert series, Sounding Board, with a fun show at Peter's Pub in Oakland. There were killer performances from Host Skull, Dazzletine, SolSis and DJs Lauren G and Nikkels. Our goal was to present a diverse lot of good music from artists whose work is known, but who could stand to be even better known. I think it was a success.

This week, we bring you volume two of Sounding Board. The event moves to the South Side, where our host is the Smiling Moose — a venue that's changed completely over the past few years, from the show space (it's now upstairs) to the menu.

The three featured artists have been covered in one way or another by CP in the first half of 2012.

Bluebird Midwest is the solo project of Roger Harvey, who you might know from his band White Wives, which I wrote about last year. White Wives released its debut a little under a year ago on Adeline, the label run by Billie Joe and Adrienne Armstrong. Bluebird Midwest released its first video through CP's music blog, FFW>>, in February.

Triggers were featured in the music section in April, when the band's second record, Forcing a Smile, was officially released — after quite a bit of wrangling. The band had been signed to a label that formed specifically to work with Triggers, but somehow the record got stuck in limbo for a year. It's a shame, because it's a great, eclectic album of power-pop and Britpop sounds. All's well that ends well, though: It's out now, and Triggers is playing Sounding Board.

And rounding out the lineup: March cover models Tracksploitation, the DJ duo from the future that often dresses in costume and has made up (maybe?) a comic-book mythos about its origin. The pair, JCT 45 and Professor ASAP, will close out the night by giving us plenty of reasons to dance. (And for those with inhibitions: There'll be drink specials courtesy of our sponsor, Iron City. That should help.)