FREEZING WEEKEND
The Abolitionist Law Center last week published a letter signed by 60 individuals incarcerated at the Allegheny County Jail complaining that their entire pod was without heat.

“We have to wear double clothing to keep warm, especially in the cell where some of them you can actually see your own breath. People are walking around shivering, and it’s causing people to be out of character and irritable and also causes health concerns,” reads the Nov. 23 letter.

It also alleges further issues with sanitation and food service at the jail. The full letter, minus the signatures, can be read below.

Jail spokesperson Jesse Geleynse tweeted on Nov. 23 that incarcerated individuals and correctional officers reported the heating problem that day, and it was fixed by Tuesday. During the time the heat was out, low temperatures reached 21 °F. 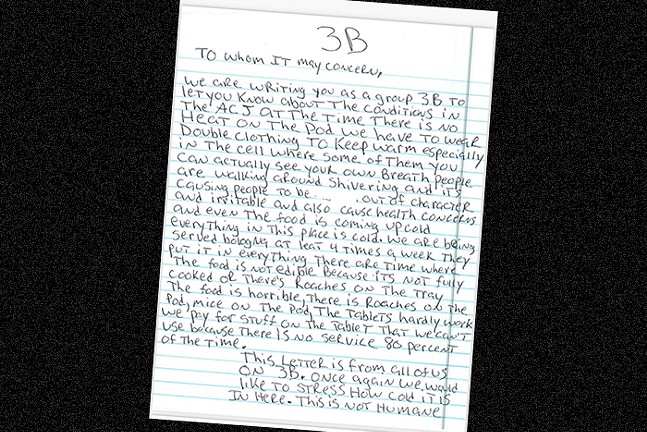 MEDICATION EXPANSION
This month, the jail announced a modest expansion of its addiction medicine program for individuals with opioid use disorder. Prior to the expansion, the jail only offered methadone to pregnant people with opioid use disorder, regardless of whether they arrived at the jail with a valid prescription for an opioid antagonist. Now, anyone who arrives at the jail with a confirmed methadone prescription can continue to take methadone during their incarceration. The jail does not currently have an induction program where individuals without MOUD prescriptions who are not pregnant can get them during their incarceration. Although Deputy Health Services administrator Ashley Brinkman has expressed a desire to expand the MOUD program to include induction, no timeline has been set.

CAUSE OF DEATH
Allegheny County Medical Examiner has released cause of death information for five of the individuals who died this year in Allegheny County Jail. According to reporting by Triblive, the examiner determined that three of the deaths were of “natural causes,” and two were due to “accidental causes.” However, deaths in custody experts say not all deaths marked “natural” actually are. A recent study on deaths in custody in LA County jails found that more than half of the “natural” deaths they examined showed evidence of physical harm.

Context: Allegheny County is, according to the Pittsburgh Institute for Nonprofit Journalism, one of two counties state-wide that does not release autopsy reports from coroners and medical examiners, meaning that the families of people who die in Allegheny County Jail often have difficulty getting details about what happened to their loved ones.

Gender: Most people in the jail are men. Women make up about 11% of the jail population. It’s unclear how many trans, nonbinary, and/or gender nonconforming people there are in the jail.

Race: 66% of people incarcerated at the jail this month were Black. Allegheny County as a whole is 13% Black.

Age: Children: 25 individuals under 18 are currently held in the jail, making approximately 2% of its average daily population.

Senior citizens: 176 individuals over the age of 65 are currently held in the jail.

Isolation: The jail’s monthly segregation report says that the entire facility was on lockdown in October 2022 for COVID mitigation. The report says “all incarcerated individuals experience limited time out-of-cell,” meaning fewer than the four hours of out-of-cell time mandated by the 2021 referendum banning solitary confinement at the jail.

COVID-19: According to the segregation report, as of Nov. 1, the facility had 39 COVID cases, and there were 12 in October.

This story was updated at 1:00 p.m. on Fri., Dec. 2 to reflect that it is jail policy for all pregnant incarcerated individuals with opioid use disorder to receive methadone regardless of whether they enter the jail with a prescription.