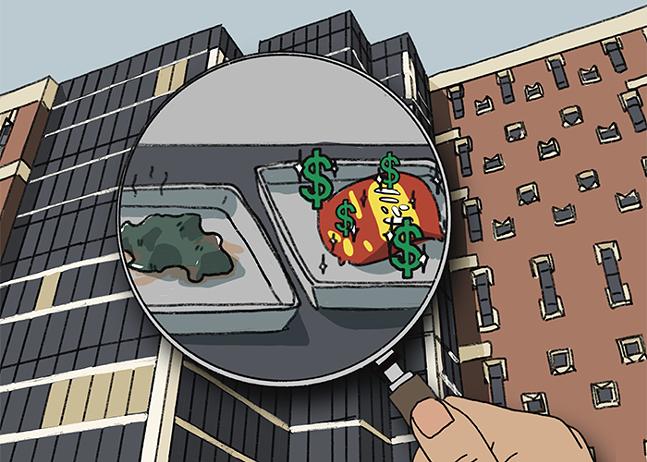 CP Illustration: Lucy Chen
According to a much-discussed University of Pittsburgh study of conditions at the Allegheny County Jail, the majority of individuals incarcerated in Fall 2021 said they were “very dissatisfied” with the meals provided.

They complained the food was too bland, too small, and sometimes unsanitary. Eighty-eight percent of respondents said they go to bed hungry frequently or sometimes in the Allegheny County Jail.

Three-quarters of those surveyed said they “frequently” supplemented the jail’s free meals with packaged food sold by the jail commissary. Commissary prices, however, are “astronomical,” as one incarcerated respondent put it. One individual said they paid $6 for a tube of toothpaste. Another said they were charged $5 for a generic jar of peanut butter.

“It's like they would rather give us bad food, so we buy more commissary that is overly expensive,” wrote one survey participant. Turns out, there may be some truth to that.

Currently, the same vendor, Summit Food Service, provides both the free meal service at Allegheny County Jail and the packaged foods and hygiene products people buy through the commissary. Some county officials, advocates, and people who have been incarcerated at the county jail say this is a conflict of interest.

“Summit has a direct incentive to provide lesser quality food so that incarcerated individuals and their loved ones have to spend money to supplement those meals via commissary,” says Bethany Hallam, a member of the Jail Oversight Board who has been previously incarcerated in the county jail.

Similar allegations against Summit surfaced in March in South Dakota, where the national food service company is headquartered. Dakota News Now quoted an anonymous correctional officer and an incarcerated person from a South Dakota state prison describing Summit’s offering of poor-quality food and expensive commissary snacks. The officer called it “a monopoly.”

Summit’s contract specifies that its commissary prices will not top 10% above market price within 10 miles of the jail. However, Brad Korinski, previously of the county controller’s office, tells Pittsburgh City Paper that in 2021 he found that Summit was charging well in excess of those contractual limits. Because Summit is the jail’s only food vendor, people at the jail are forced to accept Summit’s prices.

Korinski is currently Allegheny County Common Pleas Judge Chelsa Wagner’s clerk, but before Wagner was elected to the bench, she was the county controller and Korinski was her chief legal counsel. During her term as controller, Wagner spearheaded several audits of private companies providing services to the county jail.

In response to complaints about high commissary prices at the jail and assurances from jail administration that Summit’s prices complied with the contract, Korinski put together a price analysis. He found that Summit’s prices often exceeded 10% above market rate, with some products listed for as much as 72% higher than market rate.

“The county should not have a situation where the commissary vendor and the food vendor are the same, because it is an inherent conflict of interest,” Korinski says, adding that he identified the same problem years ago when the controller’s office began auditing the jail’s previous food vendor.

In 2020, Wagner released an audit of the jail’s previous food service contract with Trinity Services Group and found that the jail’s vendor served poor quality free meals along with overpriced “specialty items,” and was largely unresponsive to incarcerated peoples’ complaints. Wagner’s office called out Trinity for “profit[ing] from inmates being dissatisfied with the meals provided and charging them in excess of market prices for something more appealing.”

As the findings of that audit were released, the jail contract with Trinity came to an end and the county put out a request for bids for a new commissary provider. Korinski says Wagner’s office advised jail and county administration not to engage the same vendor to provide both meals and commissary at the jail.

“Not surprisingly, when the county put the commissary contract up for bid, of course, the county did not listen to the controller’s office, because that's not what the county does,” Korinski says.

Summit began providing commissary service to the jail in April 2021. In accordance with state law, Allegheny County awards contracts through a sealed, competitive bidding process that awards the contract to the “lowest responsible bidder.”

Korinski says that struck him as bizarre.

“In my experience, when a vendor is not doing what that vendor has promised that it is to do, the county holds them to account,” Korinski says. “But in the jail, different rules apply; the county doesn’t care. I feel pretty confident in saying there’s not another department in the county that would be run this way, because, again, we have good people running the county. It’s just with the jail, no one cares.”

Summit’s commissary contract was scheduled to end this summer, but it was extended until Nov. 30, 2022, in order to allow the county to finish the negotiation of the jail’s next commissary contract. The details of that contract are yet to be announced.

Neither Summit nor Trinity responded to request for comment.

Representatives from Allegheny County Jail and the County Executive’s office did not respond to questions about the circumstances of Summit’s contracts or the jail and county’s contract compliance mechanisms.

REPLY ALL
A few days ahead of this month’s Jail Oversight Board meeting, Allegheny County Jail administration released a written response to the University of Pittsburgh School of Social Work survey that painted a grim picture of jail conditions. The jail’s statement can be found in full here. In it, the jail administration expresses surprise at the study’s finding that incarcerated individuals overwhelmingly report purchasing items from the commissary that they consider necessities and describes the facility’s policies regarding basic needs and medical care.

DR. WHO?
On Oct. 5, Brittany Hailer of the Pittsburgh Institute for Nonprofit Journalism reported that Wilson Bernales, who was then one of Allegheny County Jail’s two doctors, had previously had his medical license “suspended, revoked, or denied” in at least eight different states. Hours after the piece went live, Bernales’ former employer Allegheny Health Network, the jail’s contracted medical provider, contacted Hailer to inform her that Bernales had been suspended “pending assessment of his qualifications and state license.”

PRESS CONFERENCE
On Oct. 6, B-PEP, the Black Political Empowerment Project, held a press conference ahead of that day’s Jail Oversight Board meeting highlighting the Pitt study and calling for decisive action to improve jail conditions. Pittsburgh City Paper’s coverage of the conference focused on Jail Oversight Board Member Bethany Hallam’s retelling of Anthony Talotta’s September 2022 death, which allegedly began while he was incarcerated at the jail. Hallam says she talked to incarcerated eyewitnesses to find out what happened. Jail spokesperson Jesse Geleynse says Hallam’s account is wrong but declined to offer corrections.

EXPENSIVE COMMENT
A former captain at Allegheny County Jail who says he was fired for reporting racist remarks from a supervisor won his suit against the county this month and more than $1 million in damages and attorney fees. Lawyers for Allegheny County say Jeffrey Kengerski was fired for mishandling a sexual harassment complaint and allegedly instructing two subordinate officers to lie in their reports. Kengerski says he was fired after reporting his boss, Major Robyn McCall, for referring to Kengerski’s Black grand-niece as “a little monkey.”

USE OF FORCE INSIGHT
A WITF investigation on the use of force in Pennsylvania county jails found that among the 25 county jails that provided use-of-force data (Allegheny did not) for the last three months of 2021, about a third of all uses of force were against individuals who were having a mental health crisis or who had a diagnosed mental illness. Check out reporter Brett Sholtis’ notes at the end of the story for an account of how he conducted the investigation, including which counties denied his Right to Know Law requests.

OVERWHELMED, UNDERRESOURCED
A joint investigation by Pittsburgh Institute for Nonprofit Journalism and Spotlight PA found that county jails across the state lack the resources and training necessary to address the mental health needs of the people they incarcerate. Most facilities that participated in research for the story identified a growing population of incarcerated people with mental illness, lack of medical staff, and inadequate state support, according to Brittany Hailer and Danielle Ohl.

WRONGS RIGHTED?
Earlier this week, the Trib ran a touching tribute to Drew Whitley, a Braddock man who died on Oct. 17 at 66 years old. Whitley served 18 years in Pennsylvania state prisons for a crime he didn’t commit. Courts reporter Paula Reed Ward’s piece focuses on the challenges Whitley faced upon his release from prison in 2006, which were compounded by the lack of state support for the wrongfully convicted, even after exoneration. “Despite his life circumstances,” Ward writes, “Whitley’s supporters said, he remained kind and gentle and without hate in his heart.”

KID JAIL
Top judicial officials in Allegheny County say the county needs a youth detention center to curb violent crime. The county is currently accepting proposals from developers to buy the Highland Park site of the now-closed Shuman Juvenile Detention Center, and they’ve indicated a preference for a privately run youth jail to increase the county’s capacity to incarcerate minors. Not all county officials agree that a youth lock-up is needed for public safety. Reporting from PublicSource weighs the consequences of privatizing detention in Allegheny County and offers updates on where key county leaders stand on the issue.

“Currently, inpatient treatment at Torrance State Hospital is the only option for individuals who are found not competent to stand trial. There are long wait times that cause longer stays in jail and further impact those individuals incarcerated here,” says Warden Orlando Harper.

Instead, the county hopes to establish a way for individuals in need of mental and behavioral support to receive those services without commitment to Torrance, the state hospital that serves 48 counties and has 104 beds, according to the release.

Gender: Most people in the jail are men. Women make up about 10% of the jail population. It’s unclear how many trans, nonbinary, and/or gender nonconforming people there are in the jail.

Race: 66% of people incarcerated at the jail this month were Black. Allegheny County as a whole is 13% Black.

Senior citizens: 172 individuals over the age of 65 are currently held in the jail.

Isolation: The jail’s monthly segregation report says that the entire facility was on lockdown in September 2022 for COVID mitigation. The report says “all incarcerated individuals experience limited time out-of-cell,” meaning fewer than the four hours of out-of-cell time mandated by the 2021 referendum banning solitary confinement at the jail.

COVID-19
According to the segregation report, as of Oct. 1, the facility had five COVID cases, and there were 11 in September.

In his monthly report to the oversight board, Warden Orlando Harper includes more detailed statistics about who was in the jail and what care they received. His most recent report covers Aug. 16 - Sept. 16 and includes information about service provision and staffing.

Visits
From mid-August to mid-September of this year, 446 incarcerated individuals received a contact visit, making up 19% of the average daily population. No juveniles received contact visits during that time.