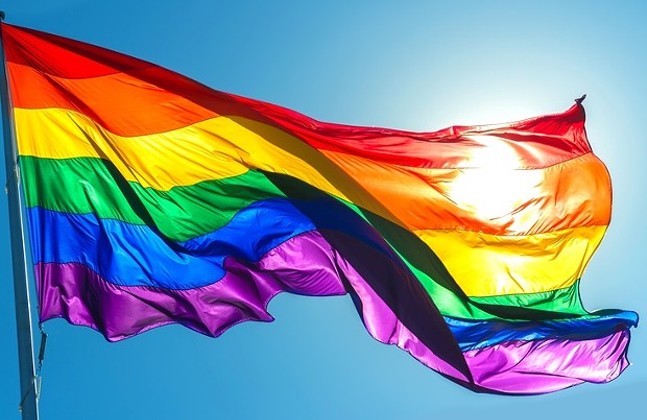 The LGBTQ flag
In 2016, Pittsburgh was the first municipality in Pennsylvania to ban the practice of conversion therapy on minors, and now Allegheny County could be next.

Conversion therapy is psychological or spiritual intervention used to attempt to change a person’s sexual orientation from gay or bisexual to straight. The practice has been condemned by LGBTQ advocates and allies, and has found to have dangerous psychological effects on those who are subjected to it.

DeFazio says he is happy to be behind this proposal.

“I have been discussing this for some time now, and I am proud to say that I am introducing legislation that will ban so-called conversion therapy in Allegheny County,” says DeFazio. “This practice is not based in science and is a cruel practice that has harmed far too many young people. Hopefully, we’ll be able to get the votes to pass this quickly.”

The proposed ordinance prohibits conversion therapy on minors, regardless of whether the mental health providers are compensated for services or receive any form of remuneration for their services.

The county bill is being introduced into Division 5 of the county code, which is responsible to enforcing public-health related rules like air quality, elderly care, and HIV reporting. The proposed ordinance doesn’t lay out a specific punishment. Pittsburgh’s ordinance doesn’t include specific punishment either, but the city’s law is enforced through the general ordinance violation fine of $300. A district judge will administer the violations.

Banning conversion therapy on minors has become law in several states, such as California, Illinois, and New Jersey, but it's still legal in much of Pennsylvania and Allegheny County.

Amie Downs, spokesperson for Allegheny County Executive Rich Fitzgerald, notes that Fitzgerald has stated publicly his support for a conversion-therapy ban, but he will review the ordinance after Council votes prior to any signature, like any other legislation.

The introduction comes about a week after county council candidate Bethany Hallam (D-Ross) called on council president DeFazio to introduce a countywide conversion-therapy ban. Hallam is challenging DeFazio in the May primary election.

“LGBTQIA+ rights are an important part of my platform” says Hallam. “This legislation will make our community safer and I am glad this is now on the council’s agenda."

Hallam recently received the endorsement of the Steel City Stonewall Democrats, the county’s largest LGBTQ advocacy group. She says of the timing of the county’s proposed conversion-therapy ban: “If I can influence the dialogue this much from the sidelines, imagine what I can get done for the citizens of Allegheny County when I have a seat at the table.”

The Steel City Stonewall Democrats have been working with county council on a conversion therapy ban bill and is taking the introduction as a win.

“At a time when LGBTQ+ youth are at a higher risk of depression, suicide attempts, substance abuse, and homelessness, it’s long past due to pass this commonsense measure and ensure none of our neighbors are being subjected to cruelty that deprives them of their basic human rights,” reads a statement on the Steel City Stonewall Democrats’ Facebook page.