Country's greatest vocalist George Jones is still on the road

Fifty years ago, George Jones scored his first No. 1 on the country charts, with "White Lightning," his rousing paean to homemade hooch. What followed were dozens of hits, many seemingly the soundtrack to Jones' tumultuous honky-tonk-and-heartbreak life. Today, country radio is a wasteland of overly produced, cross-over pop tunes, where shamefully, there is no room for living legends like Jones, who is still making records. (His 2005's Hits I Missed ... was a clever collection of songs Jones turned down that became chart-toppers for other performers.)

The indefatigable Jones, now 78, continues to tour, from big halls, county fairs and -- the savior of yesterday's still-popular acts -- regional casinos. Nonetheless, the Possum found time to respond to City Paper's inquiries, albeit via e-mail where the full effect of Jones' famous shape-shifting vowels is sadly lost.

Did you ever think you'd be playing so many casinos?
We love to play the casinos. The fans that come are hardcore country-music fans. They have lots of options for shows, so you know they really want to see you.

Who is the one singer you would have liked to see perform but didn't have the chance?
Frank Sinatra.

If you could record a song tomorrow with any performer, who would it be?
Kid Rock.

Do you watch any music-talent TV shows?
I do watch American Idol. I really enjoyed last week because Randy Travis was on, and they made the singers pick a country song.

They've made movies about other country legends such as Johnny Cash, Hank Williams, Loretta Lynn: Would you like to see a movie about your career, and who could play you?
We are negotiating right now for a movie deal about my life. I would love for Billy Bob Thornton to play me. I think he is one of the most diversified actors there is.

What's your favorite movie about country music?
Pure Country. I love George Strait and I loved the theme of the movie because it was based on a singer's life.

What do you listen to in your car?
Sirius and XM Radio because I can listen to real country music.

Is there anybody in country music with better hair than you?
Dolly Parton.

Editor's note: An earlier version of this story included an incorrect age for George Jones. 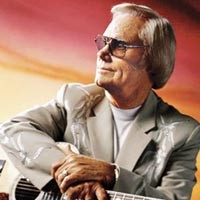