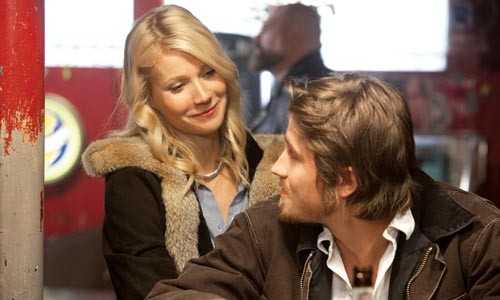 An up-and-coming country singer named Beau (Garrett Hedlund), who has some undefined menial job at a rehab center, hooks up with a patient, huge C&W star Kelly Canter (Gywneth Paltrow). But Kelly's husband/manager, James (Tim McGraw), checks her out early for a mini-tour. If you think that makes no sense, wait till you see who he books as an opener -- Beau! the guy he knows is sleeping with his hot mess of a wife-slash-meal ticket. Then, he adds a cute little chirper, a beauty queen named Chiles (Leighton Meester), who's got cow eyes for Beau, Kelly, James and stardom. Hoo boy -- just add Jack Daniels and this is a party!

This backstage melodrama from writer-director Shana Feste goes right down the highway you expect, making all the stops: being a huge star is really hard and stuff; being unknown and in love is better than being famous and in hate; the bottle will let you down; and, when you need a yee-haw boost, nothing beats hopping a freight train for an afternoon. (Just when I thought this hastily scripted piece of glammed-up corn-pone wouldn't hit the classic momma-trains-truck-prison-getting drunk prerequisite of "a perfect country and western song," the film came through on all four.)

Kelly is emotionally fragile, we're told repeatedly. (We're also told she's strong, or used to be strong, or is like weak and strong together.) How fragile? Well, she carries a rescued baby bird named Loretta Lynn around in a cigar box. We're meant to sympathize, but Feste gives us nothing to hang our cowboy hat on. The dialogue is laughable, and while Paltrow does fine playing a country-star-playing-a-country-star (Kelly's sad job), she's less convincing that there's a struggling human being behind the sequined mini-skirts.

The music biz is brutal, and there's a lost opportunity here to lay bare some of the extraordinary white-washing country music engages in: Its stars are "jest folks," who sing about what "real Americans" care about (dirt roads, fishing, pickups, cheap beer, etc.) Feste flirts with calling bullshit on how modern country is calculated pop music covered in fake hay; Beau, who favors a neo-trad sound and style, gets in a good dig that songwriting isn't "like Mad Libs, where you put in a noun America likes." But when Kelly finally performs, it's a glitzed-out, phony-baloney, country-flavored stage show that made me want to take my eyeballs out and stuff 'em in my ears.

The final indignity is the film's title, which is Kelly's signature song; in it, she explains she's not just strong, but "country strong." Disregarding any arguments for city strong and exurb strong, the film simply eats its own critique, and adds a word that American likes.