Bram Stoker's Dracula lives on. The 1897 novel has so many reincarnations that the mind reels about when, where and how the undead bloodsucker will next materialize.

He looms again in Ted Tiller's 1971 play Count Dracula, produced with great style by The University of Pittsburgh Repertory Theatre. Director W. Stephen Coleman and a fantastic cast walk the perilous lines among seriousness, melodrama and hilarity without ever falling into obviousness and overplay.

This version of the tale takes place mostly at Dr. Seward's Asylum for the Criminally Insane, outside London, where also live the kindly doctor and his batty, sherry-dependent sister Sybil. Across the valley, a creepy castle houses a new neighbor: The Count.

While hanging around for a month, the Count has been getting up close and personal with Seward's ward, Mina Murray, betrothed to Jonathan Harker, who has never met the Count. Mina has been looking wan and weak recently. The two little holes on her neck could be the reason. Seward's one-time mentor, Prof. Helga Von Helsing, puts two and two together: Mina's double punctures and two of the Count's canines. Not pets, even though the Transylvanian ex-pat controls a pack of wolves.

You know the rest. What you may not know is how well Tiller has put this together, adhering to the essence of Stoker's concept, never sending it up, turning it into a howl by keeping it straight while creating potential for goofy bits. And director Coleman gets it all superbly, making sure the characters take themselves seriously even when doing and saying off-the-wall things.

In the title role, Sam Turich's Count strides the stage with perfectly paced flourishes and undertones, continentally accented, always in command. Ana Noriega does wonders with Mina's transformations, from timid to stiff as a board when Dracula gestures hypnotically, to becoming lusciously sexy when trying to convince Jonathan they might move on to something more than discreet kisses.

As the only representative of the resident criminally insane, the oral fly-catcher Renfield, Cameron Crowe hits the right notes, like a vivid punk-rocker. Holly Thuma and Elena Alexandratos also light up the shadows as Sybil and Van Helsing.

Trick or treat? A bagful of both. 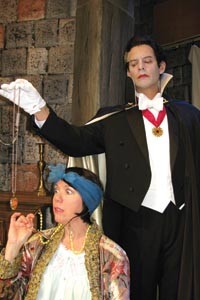