Corningworks' The Tipping Point asks 'What might it be like if we had to seek refuge?' | Theater | Pittsburgh | Pittsburgh City Paper 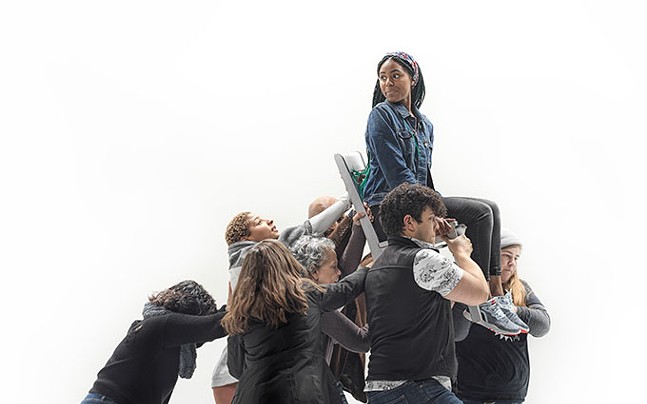 “They’re fuckin’ armchair liberals,” Beth Corning cries out angrily while discussing her newest production, The Tipping Point, an artistic collaboration between her Corningworks company and the international medical organization Doctors Without Borders. It’s an older term coined in the ’60s that references “people who were really liberal but couldn’t get out of their damn seats,” according to Corning. Today, she’s speaking of folks on social media who like to bitch about problems without actually doing anything beyond typing their disgust into a keyboard.

Everything about Corning is on fire these days, from rage at the current political state of the world burning inside of her to the hair on her head — save for a long silver streak in the front that she leaves untouched, a vibrant shade of not-quite-natural red, mimicking the color of flames. Her personal Facebook page is a constant stream of lit-up frustrations; recently, directed mostly to the Trump administration, using capital letters and extra exclamation points when especially enraged.


She lists current events that aren’t being addressed: 800,000 Syrians displaced in three months, according to The New York Times. “That’s bigger than Pittsburgh!” Corning cries. Kids held in cages. “That’s not your kids,” she says. Flint water. “How many years has it been since they can drink the water? Would you still stay there? Obviously, they are.” Climate change, heat waves. “We’ll get air conditioning, honey.”

The Tipping Point, with 20 performances between March 18-29, is Corning’s “wake-up call.” Part-theatrical performance and part-immersive experience, the production aims to ask the questions: “What might it be like if we had to seek refuge? Do you think it can’t happen here? Will you know when it’s time to leave? What is it going to take?”

The immersive part of the program is re-imagining Doctors Without Borders’ global interactive exhibition Forced from Home, which included a tour stop in Pittsburgh three years ago, where the public could experience part of what it feels like to be on the move when being forced to leave home. The guided tour led people through the challenges refugees face, including staged camps and medical stops. An entire set has been built for Corningworks’ version inside an arts space and former church in Carrick. (Corning doesn’t give many details about her reworked version, but does let slip that she spent $500 on baby dolls.)

While she insists The Tipping Point isn’t about her, everything in Corning’s life thus far seems to have prepared her to take on this story. She’s tackled social-justice topics like the #MeToo movement in previous pieces, but she says those were simply “based on humanity.” This one, she says, is political. “This one has an agenda,” she adds.


One of the things she said helped her move past being an armchair liberal was volunteering to work with a resettled Kurdish family from Syria through The Jewish Family and Community Services’ Refugee & Immigrant Services program. It was only supposed to last three months, but it’s now been three years and she says she feels as if she’s become an extended member of their family. 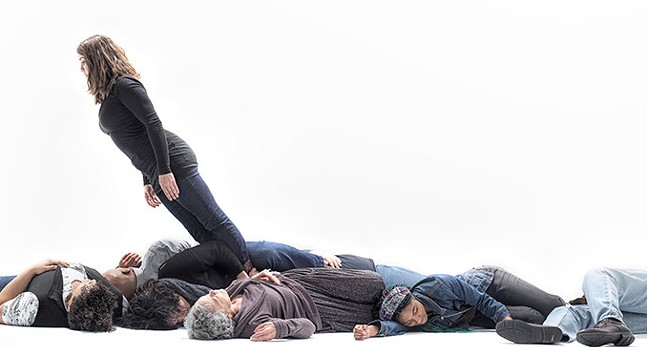 Talking to them is what gave her the idea to talk to more local refugees to use in the script for The Tipping Point, but after asking for introductions through local organizations, she was told the experience would be too traumatic for refugees to go through. Corning’s volunteer family disagreed and instead helped gather their own group of refugees, who she paid in exchange for hearing stories on why they left their home countries: not being able to go outside their home; people being killed next door; not being able to afford a loaf of bread. Corning’s eyes fill up with tears as she repeats what one of the men told her through the translator after the interviews were done: “Thank you for bringing us all together. Thank you for allowing us to tell our stories because nobody asked. We feel nobody cares.”

The Tipping Point features a cast of 19 including a mix of actors and four dancers; a few of the refugees who shared their stories will also appear in the theatric portion of the show. With stairs and uneven terrain, the production is not handicapped accessible, and while Corning doesn’t believe she needs to provide trigger warnings to the audience — “It’s like going to a Holocaust movie. You don’t put up warnings. It’s a fuckin’ Holocaust movie.” — she does recommend that no one younger than 16 attend.

Update, March 13: The Tipping Point, originally scheduled for March 18-29, has been postponed to Sept. 16-27 due to response to the coronavirus.