Three-D animation and a lively heroine bring this fractured fable to life. 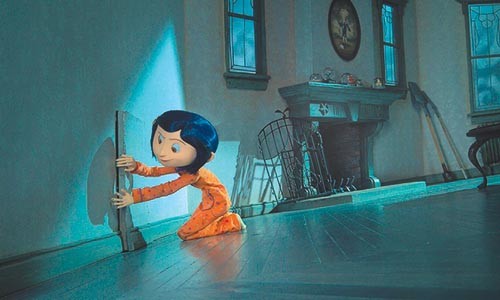 For a bright, lively tweener girl, the only thing worse than moving to a gloomy Victorian home in the sticks is discovering that the house harbors a monster that wants to suck the soul out of her. Such are the trials of Coraline, the blue-haired, snarky star of this eponymous animated feature.

Left to her own devices by her busy parents, the inquisitive Coraline (voiced by Dakota Fanning) discovers, in short order: a nerdy neighbor boy; a pushy housecat; kooky housemates (the upstairs is rented by a deranged former Russian circus performer, the basement by a pair of dotty grande dames of the stage); and a mysterious little door.

Who can resist a mysterious little door? Coraline can't. The doorway, she discovers, is a portal to another nearby world where everything is the same, but different. Same house -- but better decorated. Same neighbors -- but more amusing. Same parents -- but oh so much better.

Coraline gets a warm greeting from a beaming woman who claims to be her "other-mother," and who lavishes her with attention and tasty treats. It is a little weird that this woman has sewn-on black buttons instead of eyes ... but never mind -- pass the fresh-baked cookies!

The film, adapted from a Neil Gaiman story, is directed by Henry Selick, who has a penchant for bringing off-kilter animated fables to the screen: He directed Tim Burton's The Nightmare Before Christmas (1993), Roald Dahl's James and the Giant Peach (1996) and Kaja Blackley's Monkeybone (2001).

In select theaters, Coraline is presented in 3-D. In that medium, the film is refreshingly free of things-popping-off-the-screen-simply-because-they-can, and instead the extra dimension really helps make Coraline's adventures into fully realized weirdness. The technique is particularly effective in fantastical scenes such as the mouse circus and the magical garden.

Coraline, which moves at a brisk pace despite its somewhat broody vibe, taps into a number of routine childhood preoccupations and fears: moving to a new location; sorting out the strangeness of adults; balancing curiosity and the thrill of discovery with potential scariness or danger; and wondering if you really do matter to your parents.

Ironically, both Coraline's parents are nurturers, at least by vocational association; they write a gardening catalog. But they are self-absorbed, distracted, and Mom, in particular, is quick to brush off Coraline's pleas for attention. The increasingly imperiled child turns to two less-than-reliable but available allies: the bumbling neighbor boy and a preternaturally sage housecat (who can speak in the other world, but in the real world is restricted to making tough-to-interpret mewls and shrugs).

Certainly, the work takes a dimmer view of moms than dads. The real mom fails her daughter, but even the attractive version of the other-mother establishes her bona fides with her domestic skills. By contrast, the other-dad is lots of fun, banging out novelty songs and designing a surreal personalized garden, complete with a flying machine. And surprise -- the other-mother is revealed to be a child-destroying monster, whose true purpose is to suck the souls out of kiddies after smothering them with artificial affection. (Somewhere Freud is nodding.)

A peculiar eye-transplant seals the deal: Thus, the other-mother, her black-button eyes shining with madness, implores Coraline to accept the "gift" -- her own set of black-button eyes to be sewn in place of her bright, real peepers.

While Coraline will be attractive to kids -- its star is a spunky, blue-haired cartoon character, after all -- much of the material is likely to be too dark and scary for younger children. That some children might have an "other mother" barely indistinguishable from their real mother who wants to grievously harm them is fodder for future therapy, or at least some troubling post-movie thoughts.

But those older, adjusted (or comfortably maladjusted) sorts who like their entertainment on the gothic but upbeat side should find Coraline to be an engaging tale and visual treat. Just keep an eye on those buttons.