CP photo: Jared Wickerham
Penn Hills Deputy Mayor Cathy Sapp announcing that Robert Gowans has been fired during a rally and press conference at the Penn Hills Police Department building on Mon., May 17, 2021
In December 2019, then-Wilkinsburg Police Officer Robert Gowans shot and killed Romir Talley, a 24-year-old Black man. After initially failing to release Gowans' name, Wilkinsburg police released it more than a year and half after the killing, and noted that he had been placed on administrative leave shortly after the shooting in 2019, but returned to his position later.

At some point, Gowans was no longer with the Wilkinsburg police, and then this week, KDKA reported that he was hired by the Penn Hills Police Department in April 2021.

Now, Penn Hills Deputy Mayor Cathy Sapp has announced that Gowans has been fired from the Penn Hills Police department. Sapp said that the Penn Hills municipal manager hired Gowans and that Penn Hills Council was never made aware of the hiring.

BREAKING: Deputy Mayor of Penn Hills Cathy Sapp says former officer Robert Gowans, who is under investigation for the killing of Romir Talley, is no longer an employee of Penn Hills, 5:09 pm, reporting for @PGHCityPaper


“We feel relief because our residents no longer have to worry,” said Sapp on Mon., May 17, during a protest outside of the Penn Hills Police Department, organized by local advocacy group Take Action Mon Valley, who was critical of the hire.

Sapp added Penn Hills will not be investigating the hiring of Gowans, even though she was pressed by some in the crowd about accountability measures.

“That’s a slap in the face. Why would you not want to know what happened? Because it could happen again. What if they decide they want to hire Michael Rosfeld?” said Fawn Walker-Montgomery of Take Action Mon Valley, referring to the police officer who shot and killed Antwon Rose II in June 2018. “[Sapp] should want to know what’s going on with her police force … and if we don’t demand to know, we’ll never find out.” 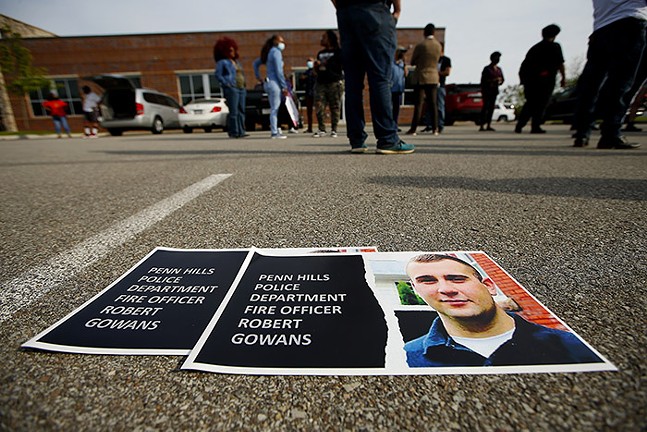 CP photo: Jared Wickerham
Posters calling for the firing of officer Robert Gowans sit on the ground at a rally and press conference
On Dec. 22, 2019, Wilkinsburg police claimed they were responding to a 911 call and that Talley fit the description given by the caller, who said Talley was armed with a handgun. Talley allegedly ran when confronted, and then police claim Talley fired at officers first, and police then returned fired, striking him seven times. Talley was declared dead by paramedics minutes later.

However, Talley’s lawyer later obtained a call log from emergency medical services that indicated the police may have been chasing the wrong person. In August 2020, Allegheny County District Attorney Stephen Zappala criticized how the case was handled and took over the case. Gowans also tipped off another Wilkinsburg officer about a mural painted in honor of Talley, which led to charges against the artists, and the mural being painted over.

Walker-Montgomery learned on May 13, during a Facebook Live event with Wilkinsburg mayoral candidate Michael Johnson, that Gowans’ had been hired by the Penn Hills Police Department in April 2021. After confirming Gowans’ employment through the Penn Hills Police Department’s website, she encouraged people to call council members starting Thursday.

Advocates like Take Action Mon Valley, Justice 4 Romir Talley, and others have been calling for Gowans' firing, and organized a protest when they learned that Gowans had been hired by Penn Hills.

While the firing of Gowans was one of Take Action Mon Valley's and Justice 4 Romir Talley’s demands, their other demand — for the DA’s office to press charges and release all the files to the family’s attorney — has still not been met.

“Our main priority is getting access to that case file. … Once we do have access to it, we expect that evidence will continue to corroborate the evidence we’ve gathered, which completely disproves the story that has been told by Wilkinsburg as well as Allegheny County police,” said Talley’s family lawyer Paul Jubas.

Jubas plans on investigating Penn Hills Police Departments’ hiring of Gowans in conjunction with another excessive force case he’s working on against the police department. Take Action Mon Valley has received multiple complaints about the police department, many of which are from elderly Black residents, which Walker-Montgomery said shows a pattern of behavior. She also emphasizes the continued trauma for Talley’s family.

“There’s a whole family that has to turn on the news and be reminded that their loved one is dead and they don’t know what happened to him. That’s so traumatic for them,” said Walker-Montgomery. “It’s not over with this. We can’t let this go unchecked because it will happen again.”

Pa. arrests more than 20K for marijuana possession during 2020; up slightly even during pandemic